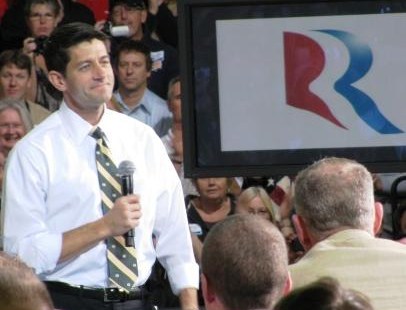 “People are the solution,” says the Republican Speaker of the House

Paul Ryan gave a speech to Congressional interns on March 23 that described what living Catholic identity in public life should look like in today’s polarized Washington DC.

Ryan is years into an “about-face” on his past support for Ayn Rand. Part of his effort to identify more with his faith than Rand’s faithlessness was his commencement address at Benedictine College, as I described here.

Where is he now? He made it a point to tell Congressional staff that he is Catholic, “and we have certain principles that I think are very important that apply to what we do in public life as lay Catholics.” He lists “the principles of subsidiarity, of solidarity, preferential option for the poor,” and sums them up in a phrase: “People are the solution.”

Here are three ways he applies them.

First, says Ryan, respect the poor — by serving them directly.

Ryan said there are essentially two ways to ignore the poor: by refusing to make their problems a priority and by addressing them only through a gargantuan bureaucracy.

In his speech, Ryan admitted that his own thinking about the poor had undergone a sea change. “There was a time when I would talk about a difference between ‘makers’ and ‘takers’ in our country, referring to people who accepted government benefits. But as I spent more time listening, and really learning the root causes of poverty, I realized I was wrong. … Most people don’t want to be dependent. And to label a whole group of Americans that way was wrong.”

Ryan said he was transformed when, as a young college graduate, he worked for Jack Kemp, who provided community-based solutions to American poverty problems.

“Here was a conservative willing — no, eager — to go to America’s bleakest communities and talk about how free enterprise could lift people out of poverty. These were areas that hadn’t seen a Republican leader come through in years, if ever.”

In a perfect example of the “culture of encounter” Pope Francis is asking for, those visits with the poor gave Ryan “a sense of purpose” and politics “became a vocation” for him.

A vocation in the full sense of the word.

“I passionately believe in the Constitution and in the concept of federalism, because it’s in perfect keeping with the tenets of my faith,” he said in answer to a question. “Whether it’s fighting poverty — eye to eye, soul to soul, with local and community groups, civic groups, on the ground poverty fighters — or whether it’s making sure that we don’t have a big arrogant paternalistic condescending government that is taking power from our lives power from our communities and displacing it.”