The Exposition of the Holy Tunic of Argenteuil 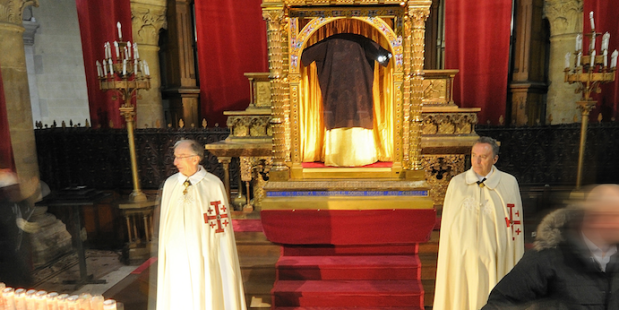 Seamless garment purported to have been worn by Christ on Calvary, displayed until April 10

When the soldiers had crucified Jesus, they took his clothes and divided them into four shares, a share for each soldier. They also took his tunic, but the tunic was seamless, woven in one piece from the top down. So they said to one another, “Let’s not tear it, but cast lots for it to see whose it will be,” in order that the passage of scripture might be fulfilled [that says]: “They divided my garments among them, and for my vesture they cast lots.”—John 19:23-24

A seamless robe, believed to have been the garment worn by Christ Jesus during his passion, and gambled over by Roman soldiers, is currently on display at the Basilica of St. Denis, in Argenteuil, France, where it is guarded by, among others, Knights of the Equestrian Order of the Holy Sepulchre of Jerusalem.

The tunic has an interesting history in the Church:

The relic is known to have arrived in France in the year 800, when the Empress Irene of Constantinople — hoping to marry Charlemagne, and thus unite their empires — presented the garment to him as a coronation gift. The marriage never happened, as Irene was soon dethroned, and Charlemagne entrusted the tunic’s safe-keeping to his daughter, Théodrade, then Abbess of the Monastery of the Humility of Our Lady of Argenteuil.

During the Norman invasion, the nuns sealed the tunic behind a wall, where it remained until the middle of the twelfth century. By then, the monastery had come under the ownership of the Benedictines of St. Denis, who, in 1131, held a solemn viewing for King Louis VII. St. Louis also venerated the relic, twice, in 1255 and 1260. In 1544 Francis I had the village of Argenteuil fortified to protect the tunic from theft.

Read the rest, which mentions blood and pollen testing, here.

Additional images of the tunic, and the faithful who have made pilgrimage, may be found at Aleteia’s French edition.