Catholic Bytes Teaches the Faith A Bit at a Time 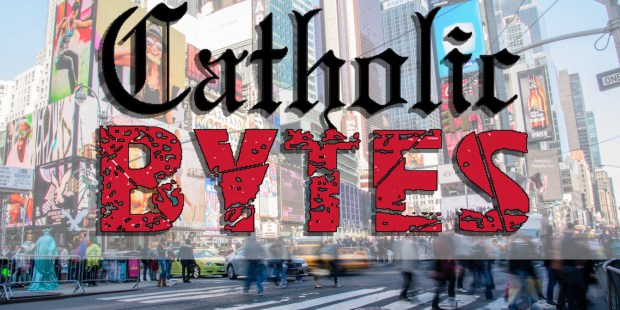 Podcasts and videos provide dynamic catechesis for people on the move

Catholic Bytes is a Rome-based organization dedicated to presenting the faith to all people, through varied initiatives, in an accessible and engaging way. What exactly are those initiatives, and how can they benefit you? Fr. George Elliott, a newly ordained priest from Tyler, Texas, is currently in Rome working on innovative media ideas. As one of the founders of Catholic Bytes, he recently spoke to Aleteia about what he and his colleagues are creating to help people grow in faith during this Year of Mercy and beyond.
What was the inspiration for Catholic Bytes, and who’s behind it?

In the beginning, we intended only to start a small catechetical podcast. We realized that there are so many great speakers here in Rome, and we wanted to get their voices back to the English-speaking countries they came from. Our best option was a podcast. Our Lord has taken our little project and turned it into an entire Catholic media organization. Despite its rapid growth, the inspiration for Catholic Bytes remains the same: everyone on the Catholic Bytes team has encountered the love of Jesus Christ and the beauty of his Church, and we want to do everything we can to help other people have that same loving and beautiful encounter.

Catholic Bytes started with three founders: Fr. Andrew Mattingly from Michigan; Deacon Greg Gerhart, from Texas, and me. Right from the beginning, two talented young lay women studying church communications here in Rome — Leslie Knopf from Kentucky, and Cecilia O’Reilly from Virginia, started working with us. Msgr. Anthony Figueiredo from Newark, took an interest in Catholic Bytes from its first days and has been an immense support and advisor to us.

We also collaborate with Baronius Press, John and Ashley Noronha (who is featured in the Misericordia Media video), and a variety of other lay people, seminarians and priests in Rome.

Who are you trying to reach?

Each of our projects has a different target audience. Catholic Bytes Podcast, is targeted toward busy Catholics or anyone interested in learning more about the Catholic faith. At Misericordia Media we have special audio guides available for anyone walking through any of the Mercy Doors throughout the world, and the St. Peter’s video is for anyone coming to St. Peter’s Basilica during the Jubilee Year of Mercy. A “Bible in a Year” project is for anyone who would like to get to know the Scriptures better.

We also have several other long-term projects planned: two mobile apps for pilgrims and tourists coming to Rome, a YouTube series similar to the podcast and a media training course to teach priests and seminarians how to use secular media outlets for evangelization.

Can you share a little bit about each of your current projects and how people can find them?

The Catholic Bytes Podcast offers free short talks on a variety of subjects ranging from faith fundamentals to Scripture, dogma, morals, liturgy, saints and Church history. Most people don’t have time to sit down and study the faith, so these episodes offer an opportunity to learn more about Catholicism and grow in relationship with the Lord, in short 5-10 minute sessions. It’s a way to bring the Gospel message to the “peripheries,” as Pope Francis exhorts us to do.

Misericordia Media, on the other hand, was developed with the encouragement and approval of the Vatican’s Pontifical Council for the Promotion of the New Evangelization, to provide content for pilgrims from across the world for the Jubilee Year of Mercy. It assists the faithful during the Jubilee of Mercy in encountering the infinite mercy of the Father through audio guides and videos available in English, Spanish, Italian, Portuguese, French, German and Polish. They can be accessed online at www.misericordia.media.

The 7-minute audio reflection prepares pilgrims to walk through the Holy Door nearest them by offering a historical background on jubilees and a reflection on mercy, utilizing the words of the Scriptures and of the Holy Father in Misericordiae Vultus. The audio guide stresses the importance of conversion and extending the mercy that one has received to others.

The 9-minute video is for evangelization and education. It is meant to assist the millions of people visiting Rome this year, to draw them closer to Christ and his Church through their pilgrimage. It features St. Peter’s Basilica, and is specifically made for pilgrims visiting the Basilica.