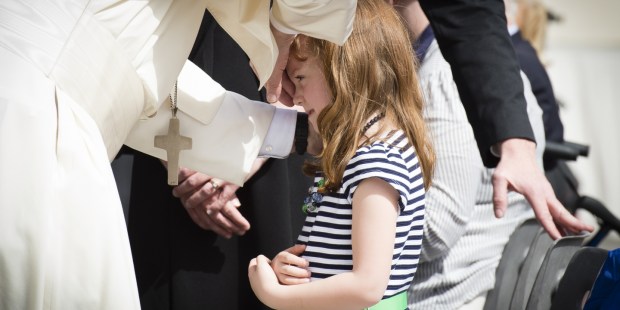 Following their meeting with the pope at the Wednesday general audience, UNITALSI (an Italian national union that transports the sick to Lourdes and shrines around the world) hosted a press conference at which Lizzy’s parents, Steve and Christine Myers, described the meeting as “absolutely amazing.”

“We never expected in a million years that we would come that close to the pope,” Steve said. “When we started this adventure with Turkish airlines, we thought maybe there was a chance we’d get to the general audience, and we’d be out there in the crowd.” He also praised UNITALSI, saying, “We are awestruck.”

But it wasn’t just meeting Pope Francis that has made this such a remarkable experience for their family, Steve explained: “The way we’ve been embraced by the Italian people since we’ve been here, we feel like we’re with family and not strangers.”

What did they talk about with the pope? “I couldn’t see everything that was going on with my wife and Lizzy. But I kept thanking him for the opportunity. He asked Michela’s name [the couple’s younger daughter], and he remembered it.”

“He blessed Elizabeth’s eyes,” Lizzy’s mother, Christine Myers, added. “He asked us to pray for him, and he said he will be praying for them.”

She said Elizabeth also gave him a gift. “It’s a meteorite, which is what started this whole process when we went to the observatory. He was very appreciative.”