How a Human Rights Advocate Became a Catholic 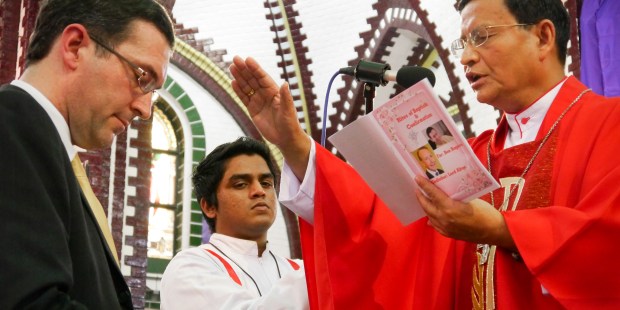 Benedict Rogers remembers lying in bed listening to sporadic gunfire in the city of Stepanakert, the capital of Nagorno-Karabakh, a war-torn Armenian enclave inside Azerbaijan. The city was bombed out, and the hotel he was staying in was more or less a shell. A University of London student at the time, it was his first trip to a war zone.

The experience led Rogers to Christian Solidarity Worldwide (CSW), a human rights and religious freedom organization, where he is now the East Asia team leader, specializing in Burma, Indonesia and North Korea, and overseeing work on China, Vietnam and Laos. (He has also worked on East Timor, Pakistan and Sri Lanka in the past.)

While at university Rogers, now 41, also became a Christian. That decision would eventually find him — more than two decades later — standing in St. Mary’s Cathedral in Rangoon, Burma, on a hot and humid Palm Sunday evening in 2013, being baptized, confirmed, and received into the Catholic Church.

Rogers, who grew up in England and is currently based in London, has put his inspiring journey to paper in a new book called From Burma to Rome: A Journey Into the Catholic Church. He spoke to Zoe Romanowsky about his work as a human rights activist and what led him to write about his story of faith.

Burma plays a big part in your story, so first let me ask you: Is there a reason you call it “Burma” rather than “Myanmar?”

Yes, Burma’s democracy leader, Aung San Suu Kyi, and her National League for Democracy, as well as many of the country’s ethnic nationalities, asked us to continue to use Burma because they argued that the regime, which changed the country’s name to Myanmar, was illegitimate, had no mandate to do so and was doing it to deflect attention from the appalling human rights situation. Now Burma has a democratically elected government led by the National League for Democracy, which has just taken office, so we will see what their position is regarding the country’s name now that they are in government.

You’ve worked in religious freedom and human rights issues for 22 years now. How did you get into this field?

Since I was very young I’ve had a deep interest in the wider world, international issues and humanitarian causes. But when I became a Christian at university in 1994, this interest took on a whole new dimension. I heard an amazing speaker, Baroness Caroline Cox (who is CSW’s patron), speak in my university chapel about religious freedom, and I had an overwhelming sense of God saying to me, “Don’t just sit there and listen; do something.” It was like being poked in the ribs with a sharp instrument. I had to respond.

That night I had a whole range of ideas for how to raise awareness on campus, so I wrote a letter to Baroness Cox, and she invited me to tea in the House of Lords to talk further, and that’s how it all began.