“Homeless Jesus” Is Homeless No More 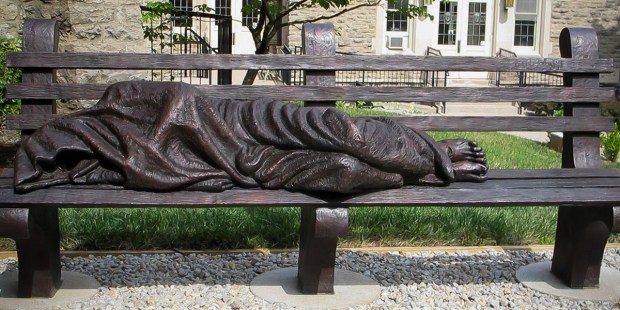 “Homeless Jesus” is homeless no more. You find him everywhere.

One of the most audacious and surprising depictions of Christ—and one of the most controversial, as well—this sculpture has captured the imagination of people around the world. First created in 2013 by Canadian sculptor Timothy Schmalz, the life-sized bronze statue has challenged both believers and non-believers alike to think of Christ and poverty in a new way—one that is both instantly recognizable and instantly unsettling.

The statue depicts a homeless man under a blanket, his face and body covered, except for his bare feet. He could be anyone—until you notice his feet carry the marks of the crucifixion.

Significantly, the Jesus on the bench has a little extra room. The bench is just large enough for someone to sit by the feet of Christ.

Now, the opportunity to do just that is spreading. A number of churches have embraced this image of Christ, and copies of “Homeless Jesus” are popping up around the world.

He is there, outside St. Alban’s Episcopal Church, in Davidson, North Carolina, where residents were so alarmed when they saw the figure lying on a bench covered by a blanket, that they called the police. As a Davidson native noted: “One neighbor wrote a letter to the editor, saying it creeps him out.”

“Homeless Jesus” also has a home at an intersection in Indianapolis, where a woman was so concerned about the huddled man under the blanket that she called paramedics.

He is in Detroit, outside St. Peter and Paul Catholic Church, where some faithful are often moved to leave flowers or notes. “We hope it elevates people’s awareness of those in need,” said the parish administrator, the Rev. Gary Wright.

Versions of “Homeless Jesus” can also be found in Toronto, Washington, D.C., Dublin, Chicago, and Madrid, among other places.

And now you can even find him at the Vatican, outside the office of the Papal Almoner. The statue, installed last month, is similar to one blessed by Pope Francis in 2013.

“When the Pope saw it,” Schmalz said at the time, “he touched the knees and feet and prayed.” The artist feels this work has special significance for Francis. “Pope Francis is doing just that,” he said, “reaching out and approaching the marginalized.”

For all the work’s popularity, it has also faced criticism. Neighbors of the statue in North Carolina complained that it was an insult to God and demeaned the neighborhood.  Recently, a request to install the statue at St Martin-in-the-Fields church in Trafalgar Square in London was also denied. The church, it seems, bans people from lying down inside the church; church officials evidently felt accepting the statue would be hypocritical and leave it open to ridicule.   That led the Methodist Central Hall in Westminster, next to Westminster Abbey, to adopt the rejected statue—but the city council refused. “The proposed sculpture,” wrote the city’s planning department, “would fail to maintain or improve the character or appearance of the Parliament Square Conservation Area.”

None of this seems to concern Timothy Schmalz, 46, who has been sculpting statues for the Catholic Church for over two decades. In his view, the criticism of the work only shows the necessity of this kind of sculpture and its message. And this piece is only the beginning. In fact, the “Homeless Jesus” work is one of a series of planned “Mercy Sculptures,” illustrating Matthew 25 and showing a life-sized Christ in various poses as figure who is homeless, hungry, sick, in prison, naked, and a stranger.

Mercy, in fact, is a recurring theme for Schmalz.  His more recent work includes a statue of Padre Pio in the confessional, which he says he created “to give a visual narration to the Sacrament of Reconciliation.”

On his website, he describes his work this way:

I had a few questions of my own for Schmalz, and dropped him an email earlier this week to get a few thoughts from him on this singular work and its impact.

Q: What was the inspiration for this unique depiction of Christ?

The inspiration came when I was in the city of Toronto and I saw a shrouded human sleeping in the middle of the afternoon on one of Canada’s busiest streets. I thought to myself: I just saw Jesus. That experience is what I sculpted to help others have the same experience I did then.

Q: What sort of reaction have you gotten around the world?

The sculpture is only in the way of what I would consider a pure discussion of Jesus for a couple minutes then people start to talk about the Gospels, the poor the rich etc. The work is a perfect instrument in this way.

Q: How do you respond to criticism of “Homeless Jesus”?

10 percent of people are offended, really offended.  My response is that there hatred proves that the work is needed.