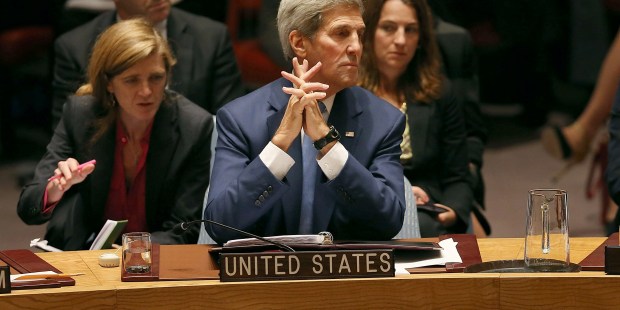 The Church in the United States needs to “keep banging the pots and pans” as a follow-up to U.S. Secretary of State John Kerry’s declaration that the Islamic State group is carrying out a genocide against Christians in the Middle East, says the head of a Christian humanitarian aid organization.

Kerry’s March 17 declaration, which identified religious minorities in Iraq and Syria as targets of ISIS’s campaign of ethnic and religious cleansing, came after months of debate and pressure from advocacy groups. But, according to George J. Marlin, chairman of Aid to the Church in Need, there’s a sense that the declaration was the last the world will hear about it.

“It was like, ‘Okay, we’re done for the day. Let’s move on,'” Marlin said at a talk this week. “The question is what happens next.

“The Christian world, the Catholics in the United States, the bishops, have to bang the pots and pans loudly enough and say, ‘We are outraged by this. What is the West going to do?'” Marlin said in an interview after the talk, which he delivered Sunday at the Basilica of the Immaculate Conception in Waterbury, Conn.

“The first thing is humanitarian aid, which is very important, and to recognize that Christians are not going into the international camps,” he said, referring to a statement he made in his talk, that Christian refugees from Iraq and Syria fear the camps because of potential harassment from Islamic radicals in those camps. “I’m not going to play Henry Kissinger and get into all the foreign policy, but sooner or later the West is going to have to sit down with the moderate Muslim world, and until they decide that Islamic terrorism, radicalism, is wrong, it has to be crushed, we can never do enough to end it. There are 1.6 billion Muslims in the world, of which a tiny minority are these radicals, so they’re going to have to get active. It was good to see the president of Egypt a year ago say to the mullahs, ‘You guys are going to have to get your act together and do something about this because this is wrong. So the Muslims are going to have to take the lead. The U.S. and the Western world can be a part of that in trying to encourage them. In the meantime we’ve got to help all these people because if it wasn’t for the institutional Church and all the Christians around the world and what we do, these people would be starving in the streets.”

At the same time, there is continuing tension between Christians determined to stay in their ancestral homelands and those who are trying to escape the miserable life ISIS has inflicted there. Aid to the Church in Need is supporting local Churches and Christian communities who are striving to maintain a presence in a land where the Church has been for almost 2,000 years.

It is a dilemma which Christian internally displaced persons staying in Erbil in Iraqi Kurdistan for the past two years may face if Mosul is liberated from ISIS control. Many of the Christian IDPs have said that even if the city is liberated, they would be reluctant to return because they feel their former Muslim neighbors betrayed them.

“I don’t have a sense of that at the moment, but what I do know is that people like Archbishop [Jean-Clement] Jeanbart [the Melkite archbishop of Aleppo, Syria] are urging their people to stay,” said Marlin, author of Christian Persecutions in the Middle East: A 21st Century Tragedy. “We’ve been there for 2,000 years. The bishops I’ve met with are hoping to help rebuild, the money we’re raising is to help rebuild. So if ISIS is pushed out of these cities and towns and there is a sense of settlement there, I’m hoping Christians will stay and come back, but that remains to be seen.”

In Syria, ISIS was pushed out of the Christian city of Al-Qaryatayn, but a local priest expressed doubt that its inhabitants would return anytime soon, especially in light of revelations this week that the jihadists murdered local Christians and tortured those who would not convert to Islam.

“The residents who have fled, both Christians and Muslims, are afraid,” Father Jihad Yousef, a monk of the order of Mar Musa, told Aid to the Church in Need. “They fear that IS may come back again.”