Finding Joy in the Marriage Mess 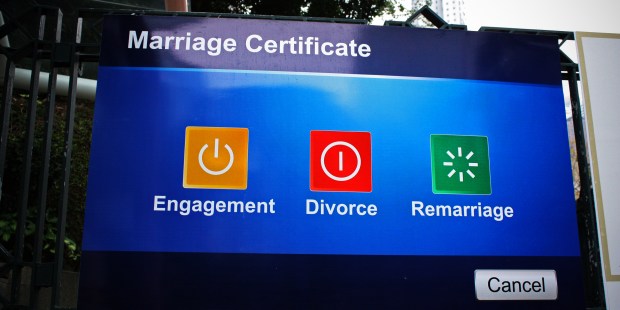 There’s a simple solution to our crisis—simple, but not easy

Modern marriage is in a mess. For many complex and interwoven reasons the traditional Christian understanding of marriage has hit the rocks, and we’re clinging to the wreckage. I’ve outlined on my blog 10 of the reasons why we’re in such a quandary. Increased mobility, socioeconomic upheaval, the sexual revolution, no-fault divorce and artificial contraception have all contributed to the disaster, but in the midst of the mess the Catholic Church holds the answer.

The answer is that marriage is between one man and one woman for life. Although the answer is simple, it is not easy. The high calling of Christian marriage has met the harsh realities of the modern world, and Pope Francis’ recent exhortation offers a way forward in trying to match the reality of the marriage mess with the high vision of true, lifelong loving marriage.

Pope Francis encourages pastors and people to accept that we are in a mess, to wade in, roll up our sleeves and help those who have been shipwrecked to gather the flotsam and jetsam of their lives and try to build a raft out of the wreckage. To do this we have to stop and consider some basic principles of moral theology in order to help understand a way forward.

The first principle is that every action is either morally right or wrong. We determine if an action is right or wrong according to the natural law and God’s law. If an action goes against nature or breaks the law as revealed in the sacred Scriptures or Church teaching, then that action is objectively wrong. It can never be right. However, a person’s guilt for committing that sin can vary according to the severity of the crime, the person’s intentions, the circumstances and the orientation of his or her heart.

Intentions, circumstances and the orientation of the heart also help to determine not if a person has broken the law but how guilty he or she is. So, for example, let’s say two people have gone 90 mph in a 60 zone. Bob, an arrogant fool, has done so because he is showing off and wants to win a race in his hot sports car. Sam, a loving father, has been speeding to get his little daughter to the emergency room because she has just been in a terrible accident. Bob and Sam have both broken the law to a severe degree, but Sam’s guilt for breaking the law is negligible, while Bob’s is great. They both broke the law, but their guilt is measured by their intention, the circumstances and the overall orientation of their heart. Sam is a good, loving and responsible father whose life is going in the right direction. Bob is an arrogant fool whose life is in a downward spiral.