“Born to Be Blue”: Hi-Hats, Heroin and the Search for Happiness 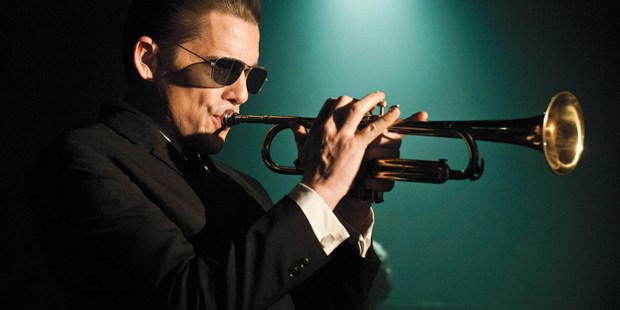 The story of the trumpeter Chet Baker’s struggle with addiction

Ethan Hawke gives the performance of his career as the heroin-addicted trumpeter Chet Baker in the new drama Born to Be Blue. In capturing the rise and fall (and rise, and fall) of the “James Dean of jazz,” Robert Burdreau gives us a “semi-factual, semi-fictional” account that, despite a winsome, smoky aur, is driven by disquietude. Born to Be Blue doesn’t shoot for high drama or tumult like so many other films about musicians with monkeys on their backs. Instead, Burdreau gives us a quiet interlude of sobriety in Baker’s life, a comeback period wedged between years spent in and out of jail cells.

Baker was also a man who proudly wore his addictions — women, music and above all else, heroin — on his sleeve. “It makes me happy,” he whispers to his co-star in a playful biopic-within-the-biopic. “I love to get high.” But that love, that little Eden he constructed for himself, is ripped away from him when a drug-related assault breaks his front teeth and ruins his embouchure, forcing him to relearn the trumpet from the ground up.

The opening image of Baker lying in an empty jail cell, face to face with a tarantula crawling out of his trumpet, becomes a powerful symbol for his journey. He turns to a program of methadone, taking baby steps to reclaiming his talent. But the glow of “West Coast cool” is eroded by a brokenness and detachment that has as much to do with identity as it does with addiction. Baker doesn’t just not know what to do with himself without heroin; he doesn’t even know who he is.

With no money, no gigs and only the selfless love of his co-star Jane to call his own, Baker slowly but surely climbs back into the elite circles of jazz music. “I’ve been working with junkie musicians for 20 years,” his parole officer observes, “and I’ve never seen anyone work this hard.” Baker’s old music producer Dick finally sets up a private show for jazz insiders to see the new Chet Baker — a stirring scene in which Hawke delivers his own vocals to “My Funny Valentine.” It’s a huge success; Baker is back, and without the junk.

But that performance sends him back across the country for a second show that could catapult him back into stardom. There, backstage at Birdland, Baker suddenly finds himself without his methadone, without Jane — and without the conviction that he can get by without his old love, which gazes at him from his dressing room table.

It’s a psychologically and spiritually rich scene. On one level, we have the insecure artist, convinced that without the heroin, he can’t make the leap from good to great that he has to make. “I don’t think I can play otherwise,” he whispers.

Dick, who has already gone out to find his friend methadone, reminds Baker that he’s been playing great the past few months. But it’s too late — because on another level, the addiction has reclaimed Baker, and is speaking through him. There’s a kind of tragic resolve in Baker’s teary eyes, as if he’s already lost the battle inside and can only justify it to himself.

But what if he’s right? What if heroin unlocks his creativity and gets him to that sublime level where he can “get inside every note”?

An unexpected answer comes in the form of a quotation from 1 Corinthians: “If you sing with the tongue of angels,” Dick says to him, “but you have no love, then you’re a clanging cymbal.” In other words, even if Baker takes the heroin and nails the show, it won’t matter, because he’ll have gained the world but destroyed himself in the process.

The scripture passage, so often read at weddings, becomes a devastating irony as Baker takes the stage to perform a woozy rendition of “I’ve Never Been in Love Before.” It’s an emotional end to a compelling story of one man’s search for himself — or, more precisely, for his own happiness — in the middle of the jazz era.

But this spiritual note also speaks directly to a nation now gripped by a heroin and prescription painkiller crisis. It’s a reminder that addiction can become so resilient and powerful, and can take its host to such incredible depths of self-deception, that only a spiritual remedy — only the shock of divine grace and our cooperation with it — can destroy it once and for all.