Benedict XVI: A “Great Reformer”? Yes, and a Stabilizer, Too 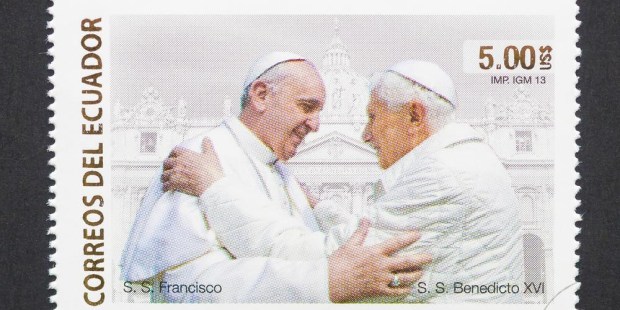 For almost 40 years, Benedict XVI has been the ballast in the Barque of Peter

Though it goes against all of the media narratives, it would be difficult for anyone to argue with John Allen’s opinion that Pope Benedict XVI, who was elected to the papacy 11 years ago, today, was very much a pope of great, if unglamorous, reforms.

Allen’s informative piece is worth reading, especially for little surprises like this:

Although Pope Francis is rightly celebrated for his humility and simplicity, the truth is that Benedict XVI contributed significantly to the “demystification” of the papal office well before Francis stepped onto the scene.

Here’s an example. Shortly after his election, Francis returned to the Casa del Clero in Rome where he’d been staying prior to the conclave in order to pack his own bag and pay his own bill, an episode that became part of his “man of the people” image.

Yet Benedict did much the same thing 11 years ago, returning to his apartment to pack up and then going around to thank the nuns who lived in the building for being good neighbors. In other words, Benedict was every bit as humble as his successor – arguably, in some ways, more so – even if that wasn’t always clear from his public image.

That Benedict made enough bold, unappreciated moves to be called a “reformer” gets a good argument from Allen, but I have always thought of him more as a Great Stabilizer — as though the papacies of John Paul II and Francis were ships kept steadied by the sturdy ballast of Benedict.

Would John Paul have been free to be John Paul — and all he became to the world — without the surety of Joseph Ratzinger so steady in service? John Paul was the “pilgrim” pope, traveling more than any before or since, becoming the first “rock star pope” and writing dense, often impenetrable philosophical treatises, while Benedict quietly supported him, wrote and taught with great theological clarity, dealt with curia politics and doctrinal matters and carried a great deal of responsibility on his shoulders, particularly as John Paul reached his culmination.

And ​now, I think Benedict is very much the ballast for Francis — who would not even be sitting as Peter, had Benedict not read the times and realized that no one was listening anymore; that something almost unthinkable was needed to reset the narrative and shake the assumptions of the world. I am still unpacking the lessons of trust and discernment that Benedict modeled for us when he threw the entire church — and by extension the whole world — into the path of the Holy Spirit. Francis often quotes Benedict, or references his work. He, perhaps better than anyone, understands the weight of what Benedict did, and why.

Some might scoff at the idea of Benedict being a “stabilizer” when his resignation brought us a pope so eager to “make a mess”. But Benedict, the great teacher, demonstrated with his action an implacable trust in the Holy Spirit; his faith that God’s hand is in all things; that — as Philip Neri said, “All of God’s purposes are to the good, although we may not always understand this we can trust in it.”

Trust, Benedict does. His actions speak of a confidence that the church will not crumble over the actions of any single man, or even an assault of ideas, because Christ told us it would not. That is, in fact, a very stabilizing, very steadying lesson to the world, if the world can absorb it: trust that we none of us matter except as God will use our lives and what we make of them, toward his own good end.

John Paul, Benedict and Francis are all men who have hugely impacted the world, both secular and sacred, perhaps more than most of us can appreciate. But it seems to me that Joseph Ratzinger/Pope Benedict was unique in that he managed to bring to the church whatever needed shoring-up; in every capacity in which he served, he was the steady, hard-working fellow quietly doing what needed to be done, and asking for nothing. He has been the deeply-anchored, stable, and largely-unappreciated pole around which two ​dynamic and ​larger-than-life papacies could spin.

When a centering pole is solid and well-anchored, it tends not to be thought about, because it is simply doing what it is supposed to do, as the touchingly humble Benedict would likely be the first to say.