A Lost Caravaggio, the Holy Grail of Art History 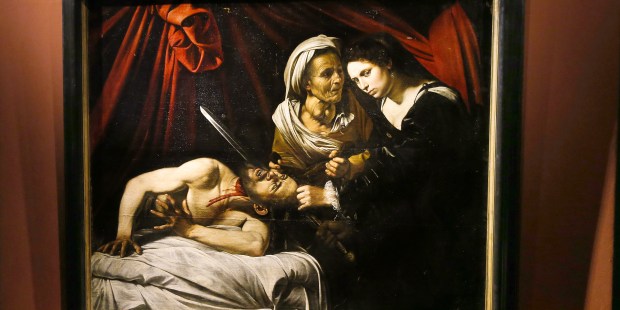 PATRICK KOVARIK / AFP
French art expert Eric Turquin stands on April 12, 2016 in Paris in front of the painting entitled "Judith cutting off the head of Holofernes", presented as being painted by Italian artist Caravaggio (1571-1610), while experts are still to determine its authenticity.
The painting was found out in an attic of a house near Toulouse, southwestern France. / AFP PHOTO / PATRICK KOVARIK
Share
Print
Elizabeth Lev - published on 04/20/16

Ever since Roberto Longhi and Sir Dennis Mahon began scouring museum cellars for the works of Michelangelo Merisi, a.k.a. Caravaggio, who by then had fallen into obscurity, the rediscovery of a Caravaggio canvas has been the secret dream of anyone who finds a dark, dusty work in an attic. These two art historians renewed Caravaggio’s fame in the 1950s while the 1993 rediscovery of the Taking of Christ in an Irish refectory made the renegade 17th-century painter a 21st-century superstar.

Since then Caravaggio paintings seem to lurk around every corner. In 2014, an art historian found Mary Magdalen in Ecstasy in a private collection, and then  a “secret stash” of his drawings appeared in 2012. The Martyrdom of St Lawrence briefly made news in 2010 and in 2005, another would-be copy, this time of the Incredulity of St Thomas, was found in Trieste.

Now, there are undoubtedly plenty of Caravaggios gone missing and some perhaps left to be found, but in the case of last week’s announcement of the rediscovery of a second version by Caravaggio — of his celebrated 1598 Judith and Holofernes — found in a French attic, and potentially worth $136 million, one might want to wait a minute before breaking out the bubbly.

The Judith and Holofernes presented by art dealer Eric Turquin to the press last week was found while making ceiling repairs to a French farmhouse in 2014. For two years, said Turquin, the painting has undergone several tests to identify its creator. While several experts lean toward a Flemish painter named Louis Finson, who made many copies of Caravaggio’s work, including a Madonna of the Rosary and a documented but lost Judith and Holofernes, Dr. Nicola Spinosa, the former director of the Capodimonte Museum in Naples, has backed Caravaggio as the author. On the other hand, celebrated art historian Mina Gregori, who also found a “lost Caravaggio,” claims it is not.

While I enjoy a good art history cage fight as much as the next man, a ground rule or two might be in order. For example, Mr. Turquin could be a little less cagey about the tests done on the work. In the original Judith and Holofernes, Caravaggio made incisions to mark the placement of his models. This was necessary as he drew very little. In some later works when he was working from memory he did not, but the woman in the French work has never appeared in his oeuvre so she would be a new model. Incisions in the canvas would be evidence in favor.

The type of canvas could also be very telling, as Caravaggio used different canvases after he escaped from Rome in 1606, producing a grainier look. Turquin suggested that the dates given for his painting span 1600-1610 (i.e., from the year after he made the first Judith to his death).  Identifying the canvas would assist in understanding if this was the painting of Judithdocumented as produced by Caravaggio for the Grand Knight of Malta after his fall from grace with him in 1608.

In addition, Turquin’s statement that the work is “without mistakes” must give Caravaggio experts pause. The alla prima technique used by Caravaggio of applying paint directly on the canvas without preliminary drawings resulted in a sense of energy and spontaneity in his pictures but also quite a few pentimenti or mistakes. Inerrancy was never a mark of the master.

And then there is the issue of the Judith of the French painting, who appears to be a portrait of a woman dressed in contemporary widow’s wear, looking out at the viewer. In all of Caravaggio’s extant work, there is only one occasion of a woman looking out at the viewer, the portrait of the courtesan Fillide destroyed in 1945. All other women, including Salome bearing the head of John the Baptist or a female bystander in the Supper of Emmaus, keep their eyes demurely downcast. Plenty of men look out at the viewer: tipsy Bacchus, dreamy musicians and youthful John the Baptist, but no women. While Caravaggio had no qualms about breeching protocol, this just wasn’t his style.

But the real caveat with this work is the storytelling. Turquin triumphantly described the work as “the utmost of a Counter-Reformation picture, and it cannot be made by anybody else other than Caravaggio.”