Up to 500 Migrants Drown in Mediterranean, U.N. Says 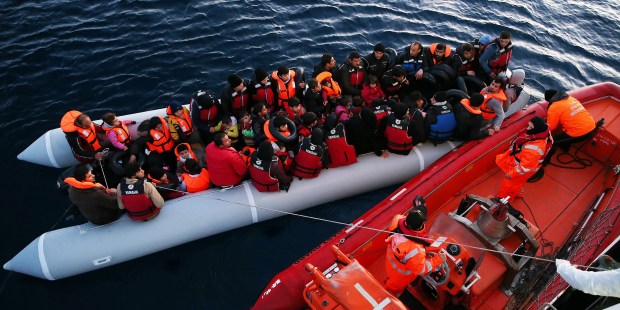 In a troubling sign that the situation is not getting any better for people seeking refuge in Europe, the United Nations is reporting that up to 500 migrants might have drowned in the Mediterranean last week. The incident apparently happened when human smugglers crammed people onto an already overcrowded ship, causing it to sink.

While Somalia’s government said on Monday that about 200 or more of its nationals may have drowned while trying to cross to Europe, the U.N. refugee agency said on Wednesday that the overall death toll might have been much higher.

“If confirmed, as many as 500 people may have lost their lives when a large ship went down in the Mediterranean Sea at an unknown location between Libya and Italy,” the UNHCR said, after speaking with survivors.

The agency said the survivors — 37 men, three women and a three-year-old child — were rescued by a merchant ship and taken to Greece on April 16, Reuters reported.

They recounted that they had been among 100 to 200 people who set sail from Libya last week headed for Italy. After several hours at sea, the traffickers tried to move them onto a bigger ship that was already packed with migrants.

This ship sank before the survivors could board it. They then drifted at sea for up to three days before being saved. The group was made up of 23 Somalis, 11 Ethiopians, six Egyptians and one Sudanese national.

If the details could be confirmed, the disaster could rival the death  toll of a similar event that took place exactly one year earlier, when an estimated 800 migrants drowned off the Libyan coast.

Reuters said that some 150,000 migrants reached Italy by boat in 2015, most of them sailing from Libya. So far this year, about 25,000 migrants have arrived — an increase of 4.7 percent over the same period last year, according to Interior Ministry data.

Meeting on the Greek island of Lesbos last week, Pope Francis, Ecumenical Patriarch Bartholomew and Archbishop Ieronymos of Athens and All Greece signed a joint declaration saying world opinion “cannot ignore the colossal humanitarian crisis created by the spread of violence and armed conflict, the persecution and displacement of religious and ethnic minorities, and the uprooting of families from their homes, in violation of their human dignity and their fundamental human rights and freedoms.”

“The tragedy of forced migration and displacement affects millions, and is fundamentally a crisis of humanity, calling for a response of solidarity, compassion, generosity and an immediate practical commitment of resources,” they said. “A broader international consensus and an assistance program are urgently needed to uphold the rule of law, to defend fundamental human rights in this unsustainable situation, to protect minorities, to combat human trafficking and smuggling, to eliminate unsafe routes, such as those through the Aegean and the entire Mediterranean, and to develop safe resettlement procedures.”