An Interactive Tour Through Hieronymus Bosch’s Garden of Earthly Delights 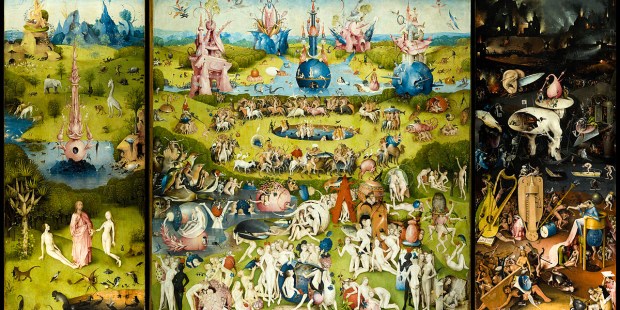 We don’t mean to scare you, but surfing through this website can literally take you from paradise to hell

Hieronymus Bosch died almost 500 years ago, and his hometown, Hertogenbosch, is paying homage by organizing an art show that gathers almost all of his masterpieces with the exception of, among others, the Garden of Earthly Delights: the triptych in which the Dutch master painted what he considered the decadence of a world exclusively interested in the enjoyment of earthly pleasures, flanked by Eden on the one side and the torments of hell on the other.

If you were to take a look at this amazing triptych, you would have to travel all the way to Madrid and visit El Prado Museum — which, by the way, will be also presenting its own collection of Bosch’s paintings. However, if the Prado seems to be a little bit too far away, the National Dutch Radio might have just what you need: an online tour — either guided or not, your choice — through the Garden of Earthly Delights.

Even though the painting is superb, allow us to give you a head’s up: maybe some of the sounds that accompany the tour might seem a little disturbing for some — we’re thinking, in particular, of the “weeping and gnashing of teeth” of hell — as some scenes from the central panel might appear to be too extreme for some sensibilities. You know, classic Bosch stuff.