REVIEW: The “Vibrant Paradoxes” of Catholicism 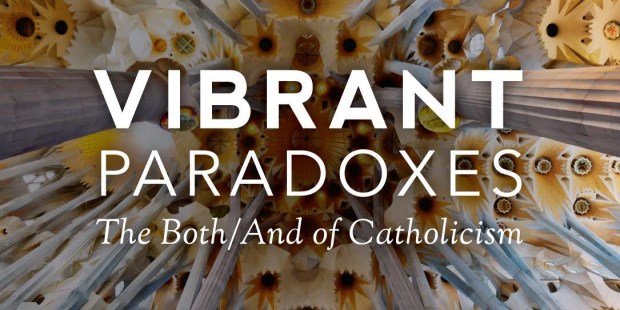 Full disclosure: The author of this essay assisted in the editing of Vibrant Paradoxes.

Jacques Maritain once observed that Aquinas “brings together,” while Descartes “cleaves and separates.”

This was more than just a comment about the difference between two philosophers; Maritain’s statement gets at the heart of what defines modern thought. Modernity is not, at its most elemental level, a sea change in rights, ethics, or politics, but in method. To be modern is to think in binaries, in “either/or” standoffs, and to cleave and separate as matter of course. It’s to see human life as a succession of problems that are best resolved by telling a story about opposing forces, and picking a side.

But a new collection of essays from Bishop Robert Barron, Vibrant Paradoxes: The Both/And of Catholicism, draws us into that method represented by Aquinas, a world in which seemingly divergent impulses — including the ancient and the new — are held together in creative tension.

“Catholicism consistently celebrates the coming together of contraries,” Bishop Barron writes in the introduction, using Chesterton’s Orthodoxy as his starting point, “not in the manner of a bland compromise, but rather in such a way that the full energy of the opposing elements remains in place. … Once you grasp this principle, you begin to see it everywhere in the great Catholic tradition. Grace and nature; faith and reason; Scripture and tradition; body and soul; God’s immanence and God’s transcendence: what the great Protestant theologian Karl Barth called ‘that damnable Catholic “and”’ is what I would call its vibrant paradox.”

The book is divided into five pairs of these apparent opposites: “Sin and Mercy”; “Reason and Faith”; “Matter and Spirit”; “Freedom and Discipline” and “Suffering and Joy.” To the modern mind these polarities cannot (and should not) be held together. A person is either insistent on moral law, or welcoming and loving; bases their life on science or bases it on Scripture; belongs to the order of chemistry or the Cartesian soul; chooses freely or follows rules and regulations; and feels either pain or happiness. You can have one, or you can have the other, but you can’t have both.

From our binary world, it’s hard to see how it could be otherwise. But Bishop Barron switches up our vantage point, and invites us to look at the issues and complexities of the world and of history from within each paradox. In a broad range of topics, which includes brief commentary on everything from iPhones to ISIS, these tensions are allowed to live together, and gradually “unlock” each issue in a way that merely picking sides can’t.

Each chapter has its heroes from the Catholic tradition: the continuity between Pope Benedict XVI and Pope Francis unveils mercy as the acute awareness of sin; following Aquinas, we see how the human person, a composite of both body and soul, relies on both the intellect and faith to see clearly; Irenaeus shows us what it means to be a human being “fully alive”; and the saints, both past and present, show us the true cost of joy.

But there’s a single, resplendent light that holds the vivid colors of these paradoxes together: what Bishop Barron calls the “orthodox Christology of the Church.”

“According to the Council of Chalcedon,” he writes in the introduction, “Jesus is not partly divine and somewhat human, nor partly human and somewhat divine. Instead, he is both fully divine and fully human, each nature non-competitively present to the other in the unity of his person. Early heresies missing this both/and principle. Monophysitism hyper-stressed the Lord’s divinity, and Nestorianism hyper-stressed his humanity; and Arianism presented the apparently reasonable compromise — a blend of divinity and humanity. Yet Chalcedon, with extraordinary finesse, said no to each of these positions, and waved the flag of divinity and the flat of humanity with equal vigor.”

Vibrant Paradoxes has been praised by everyone from George Weigel to Father James Martin, SJ, and includes a resounding foreword from Peter Kreeft. It’s easy to see why: in a world torn apart and fragmented by antagonism, this is an engaging, entertaining, and eminently readable presentation of a tradition that has always dared to “bring together.”