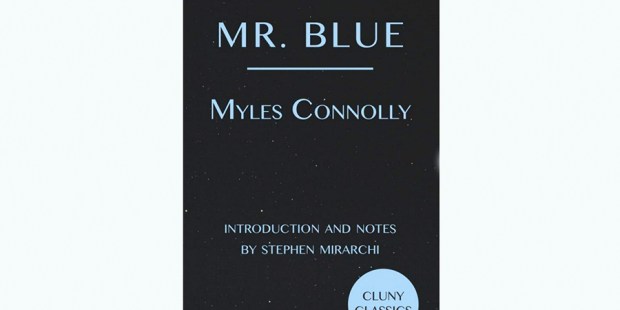 At first Mr. Blue sold only 70 copies in a year. And though it’s been in and out of print since its publication in 1928, the novel by Myles Connolly has been an enduring classic, perhaps because it speaks to the deepest yearnings found in the human heart, and those have not changed.

“Mr. Blue worried, back in the 1920s, about how young people would keep their faith in an imagined time, a century into the future, when the world might be indifferent to faith and beset with religious intolerance,” wrote Mary Connolly Breiner, daughter of Myles Connolly.

The novel’s protagonist was called a modern “St. Francis of the city” back when it first came out. Now we have a pope named for the saint of Assisi who laments today’s “globalization of indifference.”

Blue is back, thanks to Stephen Mirarchi, assistant professor of English at Benedictine College. He’s edited the novel in its first scholarly annotated edition, published by Cluny Classics. Mirarchi provides the notes to help the inquisitive reader fully appreciate the back story to Mr. Blue and to “get” the theological, historical and aesthetic references in the text.

Or to just enjoy it for what it is.

Mirarchi spoke with Aleteia from his office in Atchison, Kansas.

What is Mr. Blue? What is it about?

It’s about several things, the most important of which is how you go from being someone who loves God and loves your neighbor to someone who does that in a way that is perfectly ordered to charity. What does that progression look like, and how can you depict that realistically? In one sense, Connolly depicts the three stages of the spiritual life — purgation, illumination and union — and yet he doesn’t do that for one character; he does it for two characters — characters who are constantly playing off each other: Blue and the narrator.

The narrator is telling the story after the fact, and he introduces us to the time he first met this character, J. Blue, whom everybody thinks is either eccentric or crazy. He’s just too happy. He lives on the roof of a building in this packing crate, releasing balloons and having brass players over for concerts, so they’d say, “Is this guy homeless? What is he?” So we learn this story and ask, “Does he have the right to be so happy?”

Well, there you go, and there are a lot of details that work with that. For Connolly, you can be happy and still be blue if you’re not living your vocation fully. If you’re doing your vocation in a good way but not yet in the fullest way, there’s still going to be some blueness there. So Blue is happy, but he knows he’s made for something more.

So as he and the narrator journey around New York and Boston, we learn what Blue is being asked to give up and how joyfully he’s supposed to do that. The tagline for the book is that it’s a modern St. Francis story: “Meet a St. Francis of the 1920s.”

There are a couple of people who know the book well — and I share their opinion — who believe that Connolly wrote Mr. Blue, at least in part, as a counterpoint to The Great Gatsby. The Great Gatsby came out in 1925, Mr. Blue in ’28. … There were all kinds of interesting references to Gatsby, which is part of what I put in annotations in the book.

Why is it a book that people should know about today, in your view?

Mary Connolly Breiner, who is the oldest surviving daughter of Connolly’s, wrote a preface for us, in which she says, “I have a feeling that Pope Francis would like Mr. Blue, that they would be true brothers in spirit.” First of all, Blue is joyful, even in his sufferings. He is someone who understands that mercy means going to people you might easily overlook or that you might easily spurn — and going to them in person and being with them.

Someone who wasn’t well known in America at that time is now-Ven. Matt Talbot, and he comes up in the book. Connolly has his narrator say that he reminds him of Matt Talbot at one point. In fact, Blue goes and ministers to lumberyard workers, which is exactly what Matt Talbot did. Connolly’s not making Blue a Matt Talbot allegory. You don’t see Blue going to daily Mass and wrapping himself with barbed wire, as in the legends of Matt Talbot. But he is someone who embodies the kind of “We’re going to go to the poor and the marginalized, and we’re going to give them this theology of encounter.”

Yet Connolly was very careful to balance the theology of encounter with the bedrock teachings of the Church and the truth of the Church. There’s a beautiful scene in the middle of Mr. Blue in which a character describes the Mass in perfect detail. He replicates the Latin, all of the vestments the priest would be wearing, including the maniple, etc.

So you’ve got the bedrock teachings of the Church plus the preferential option for the poor. It fits very well with what Pope Francis has been telling us about the theology of encounter, and at the same time, it’s a prescriptive against the sort of thing Bishop [Robert] Barron has been hitting on in a lot of his homilies lately — that secular do-goodism is not enough. This book is about the fact that the good of the Catholic Church, the teachings of the Catholic Church, are what makes this possible.