Girls Turn Origami Into Water for the Thirsty 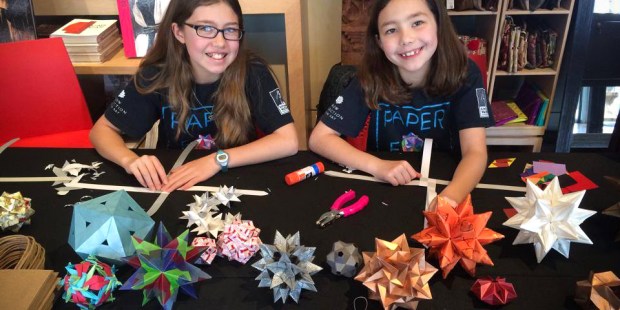 When Katherine Adams was four, her father taught her origami. She would fold paper with her dad in the hour after her sister’s school started, before the bus came for her. Eventually it became a family activity, as the older sister, Isabelle, also took up the hobby.

About a year later, what had started out as a dad-trick to help a little girl pass time turned into a globe-sized response to Jesus’ cry, “I thirst.”

Katherine and Isabelle, at ages five and eight, one day learned that children in some parts of the world don’t get the luxury of school, and for a simple reason: they don’t have water and have to walk for miles to get it.

The girls decided they had to do something to help their far-off peers, even if it would only be a little. They turned to their origami hobby as a possible solution.

Katherine and Isabelle approached the manager of a local coffee shop and asked if they could give away their origami ornaments there for a donation toward a well. The coffee shop manager said yes, and they made a goal of raising around $800, part of the total necessary to drill a single well in Ethiopia.

The girls brought their folded paper ornaments to the shop and sold out in two days. They got to work making more, and within two months they had raised more than $9,200 to build the first well.

Today, Katherine is 10 and Isabelle, 12.  They and their parents run the charity they established, called Paper for Water.  Together with volunteers at folding parties, they have folded and sold enough ornaments to finance drilling and maintaining more than 100 wells, located across India, Africa and Central America.  They’ve also begun work participating in “The Navajo Project,” addressing the need for running water among 377,000 Native Americans.

The goal for 2016 is to help fund 28 wells. They’re also trying to help create “Paper for Water” clubs in schools to continue to grow the ministry.

Success has brought many opportunities to the whole family. Even the youngest sister, Trinity (age six), is learning the paper craft her sisters teach, and joins in giving speeches to assemblies about the need for wells in many countries.

This past year the family journeyed to India to see the wells. They visited schools, put on a play and taught the kids they met how to do origami. “I got to see how we make an impact,”  Katherine said.

Establishing and growing a charity hasn’t been easy at every step.  Before the family created a volunteer base, for instance, there were times they stayed up to midnight just to get the orders filled.  “It felt like having a newborn every year,” the mother of the family, Deborah, said. She added that the girls have given up occasional birthday parties or other activities in order to speak at volunteer trainings. Though their work has required sacrifice, Deborah says, they’ve done it willingly, sometimes outdoing her in generosity.

“One year,” she recalled, “Ken was about to sell his business. We’d been on the road that summer and I came home tired. We thought about quitting — maybe then we could travel and play — but I decided that day to go to my Bible study. I didn’t want to, but I went. They were watching a video on the water crisis, about the 780 million in the world who lack water, and it was God reminding me why we do this, all the reasons we do what we do every day. I started crying.”

The struggle to maintain balance has been something the family continues to wrestle with, but when they’ve let themselves surrender to God while pressing on, volunteers have shown up. “We had a huge order around Christmas,” Deborah recalled, “and people came, people called, they brought food.  This past year, we got to bed before midnight on Christmas because of the volunteer base.”

She said she’d learned to trust that still, small voice, that “God is always working and I don’t have to worry. God can do it while I’m sleeping.”

“Before we did this project, I relied on our own strength,” Deborah said. “We were in control, making things happen. But God’s out there paving a road, leveling it before we get there. I’ve learned, I think we’ve all learned, God is opening doors all the time. There is no other reason.”

When asked what is next for Paper for Water, the kids said they hope to get 1,000 people to donate five dollars a month to the “Well of the Month” club, and continue to invite “children to help children” by raising awareness at the elementary school level. They will also continue teaching other kids how to fold the ornaments and be part of Paper for Water. With childlike hope, they say they would like to fund wells for every village that needs one anywhere in the world. In the meantime, they can rest in knowing they’re answering Jesus’ cry, “I thirst.”