Mother Angelica: The Legacy of a Life Well-Lived 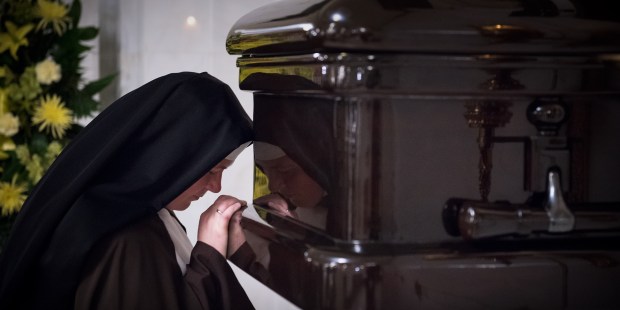 One month later, a look back…

An aged abbess who has ruled her monastery for over thirty years reaches her culmination. She has had a massive stroke that has left her able to pronounce only one word, “Tell…” and she is unaccountably lingering as she repeats it. Keeping a death watch for three exhaustive nights, her nuns are tired, but their concern is only for her. “What could she need to say? Why can’t Mother die?” they ask among themselves. “She can’t be afraid. No true nun fears death.” And yet the abbess remains, repeating the word, “Tell…”

She has more to say, and it is important. Eventually, “tell…” gives way to what sounds like, “Sorry…”

Finally, one of her daughters rises from her knees and tells her, “No matter what it is, we will deal with it. Dear Mother, lay it down.”

The abbess had been a charismatic woman; she was smart, headstrong, humorous, a true visionary. She knew how to get what she wanted, and she had a broad swath of friends, from all walks of life, who helped her to build on her dreams. These friends make their way to the grounds and chapel of the large monastery, now, to pay their respects to a great nun; to participate in liturgy, and condole with the community. For the nuns, however, the waking and funeral feels oddly public, and they are grateful, finally, when all of the ritual is over and the visitors have left, so they can inter their beloved superior within the enclosure where they have prayed together under her watch, have adored together, and laughed and cried and lived as true sisters. Together. The public had been permitted their time with her, but now, finally, came the private farewells, filled with a sense of intimacy and knowing, sadness and serenity –- the sense of things on-going, according to plan, and an eventual reunion in eternity — for “no true nun fears death.”

You are forgiven, dear reader, for thinking that this story is about Mother Mary Angelica of the Annunciation, PCPA, foundress of Our Lady of the Angels Monastery, the Shrine of the Blessed Sacrament, and the global worldwide communications network that is EWTN. In truth Mother Angelica’s time as an abbess (and her death) are remarkably similar to how Rumer Godden described the life and death of Lady Abbess Hester Cunningham Proctor, OSB, in her literary masterpiece, In This House of Brede.

Familiarity with the novel provided a poignant background to (and near-but-incomplete understanding of) the remarkable images Aleteia’s art director, Jeffrey Bruno, brought back from his assignment for EWTN News a mere month ago. Here we see those final farewells, and how the legacy of one fervent and determined nun lives on in her community, is reflected in a daughter’s face, closed in prayer yet without the contortions of hopeless grief. Instead there is tranquility in a tender moment, and a sense of purpose and perseverance and surety — because these nuns possess “the realization of what is hoped for and evidence of things not seen” that is faith, and so they will go on, living lives of prayer, adoration and sacrifice, for the sake of the world.

After Abbess Hester’s death in Brede, a just-entered postulant is startled to hear the first prayers of the grieving community interrupted by the bells calling them to Vespers — to praise and worship. “We go on as if nothing has happened?” She asks. “No, we don’t,” comes the answer, “we just go on.”

Indeed, do they go on. Only weeks before Mother Angelica’s death, one of the foundations gleaned from her stalls, Our Lady of Solitude, in the desert of Arizona, celebrated the appointment of its first abbess. A new postulant has entered Mother Angelica’s community; a sister is preparing for her solemn vows.

They just go on.