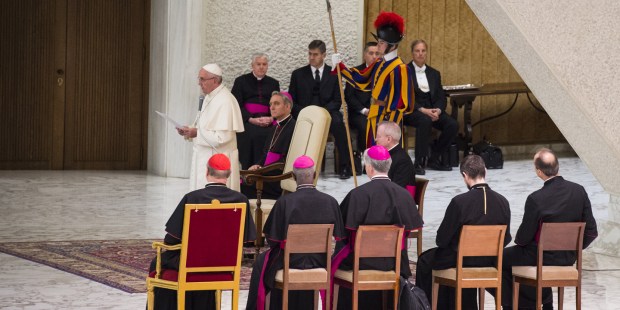 Speaking to participants in a Vatican-hosted conference on progress in regenerative medicine and its cultural impact, the pope first counseled participants to make known the problem of rare diseases on a global scale, countering a “globalization of indifference” with a “globalization of empathy.” Second, he said, invest in scientific research, both academic and industrial, which pays “constant attention to moral issues in order to be a tool for protecting life and the dignity of the human person.” And finally, he told participants, increase access to treatment by opposing “an economy of exclusion and inequality,” where profit prevails over the value of human life.

The conference, titled “Cellular Horizons,” is being held at the Vatican April 28-30, and has brought together the world’s leading cell therapy scientists, physicians, patients, ethicists and leaders of faith, government and philanthropy to discuss the latest cellular therapy breakthroughs and hope for the future.

U.S. Vice President Joe Biden, who lost his son to cancer, addressed participants saying his son’s doctors told him that just in the last 4-5 years, cancer research has reached a turning point and that for the first time in history, many disciplines are working together to bring a cure. His voice rising with emotion, he challenged the scientists and doctors to share their research and data with each other: “Why do you wait? Do it now!”

Here below we publish an English translation of Pope Francis’ address.

I offer my cordial welcome to you all. I thank Cardinal Gianfranco Ravasi for the words he addressed to me, and especially for having promoted this meeting on the delicate issue of rare illnesses considered in today’s socio-cultural context.

In your process of reflection, you applied the professionalism and high level skills in search of possible therapies, without neglecting the ethical and anthropological, social, and cultural questions, as well as the complex problem of accessibility to the treatment by those affected by rare diseases. Many times, in fact, not enough attention is paid to these patients, because we do not see a significant return on the investments made on their behalf. In my ministry, I constantly meet people with so-called “rare” illnesses. In fact, these diseases affect millions and millions of people around the world, causing suffering and concern in those whom, in various ways, take care of them, starting with their family.

Your meeting takes on an even more significant value on the horizon of the Extraordinary Jubilee of Mercy, which is “the fundamental law that dwells in the heart of every person who looks sincerely into the eyes of his brothers and sisters on the path of life.” (Misericordiae Vultus, 2). It is a source of hope to see this project involves different people and institutions, cultures, societies and religions, all united by a keen sensitivity toward persons who are ill.

I would like to consider, albeit briefly, three aspects the commitment undertaken by the Pontifical Council for Culture and the institutions involved with it, the Vatican Foundation Science and Faith – STOQ and Stem for Life Foundation, along with many others who are associated with this cultural path.

The first is “raising awareness.” It is of fundamental importance to promote in society the growth of the level of empathy, so that no one remains indifferent to their neighbor’s cries for help, even when he is afflicted with a rare illness. Human sensitivity, however, should be universal, independent of religious belief, social status or cultural context.

The second word that accompanies you on your path is “research,” considered in its two inseparable meanings: education and true scientific inquiry. Today more than ever we feel this educational urgency, together with the maturing of the intellectual faculties of the students, ensures an adequate human, ensuring the highest professional standards. In this pedagogical frontier, it is necessary, in the context of the life sciences and medical sciences, to design interdisciplinary courses reserving a substantial space for human formation with a fundamental reference to ethics. In fact, even the research, both academic and industrial, requires constant attention to moral issues in order to be a tool for protecting life and the dignity of the human person. Thus, training and research require being placed within the horizon of service to high values, such as solidarity, generosity, selflessness, the sharing of knowledge, respect for human life and fraternal and selfless love.

The third expression I would like to consider is “ensuring access to treatment.” In the apostolic exhortation Evangelii gaudium, I noted the value of human advancements in this historic moment, offering as examples “areas such as health care, education and communications” (52).
However, I stated strongly that we must oppose “an economy of exclusion and inequality” (ibid., 53), which sows victims when the mechanism of profit prevails over the value of human life.

This is the reason why the globalization of indifference must be countered with the globalization of empathy. We are therefore called to make known the problem of rare diseases on a global scale, to invest in the most appropriate training, to increase resources for research, to legislative amendments and change the economic paradigm, so that the human person is privileged. Then, through coordinated efforts at various levels and in different fields, it becomes possible not only to find solutions to the suffering that afflicts our sick brothers and sisters, but also to ensure access to treatment for them.

I encourage you, therefore, to cultivate these values which already belong to your academic and culture itinerary, undertaken several years ago, and which continues to involve an ever greater number of people and institutions around the world. In this Jubilee Year may you be qualified and generous cooperators with the Father’s mercy. I accompany you and I bless you on your journey; and I ask you, please, to pray for me.  Thank you.