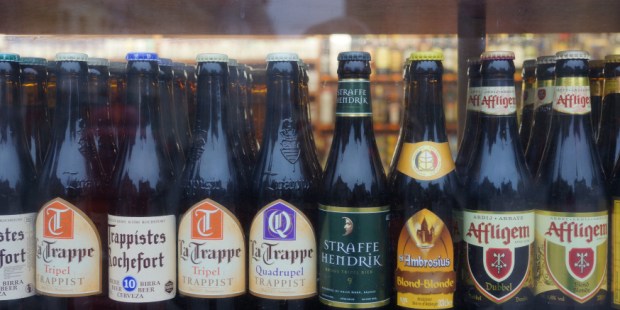 All beers from monasteries are not alike

Again, no: “Trappist” is not a kind of beer, and neither are “abbey beers.” Actually, it would be accurate to say that their brewing methods are not that different, since they both belong to the same unique craft tradition. The distinction refers to where the beer is made and who brews it, as the master brewer David Jaimes Messori points out in this blog.

There are around 176 Trappist monasteries around the world; that is, monasteries that belong to the Order of the Cistercians of the Strict Observance, a branch of the Cistercian Order, which is in turn a division of the Benedictine Order, and only 11 of those have the license, granted by the International Trappist Association, to brew beer. A small rhombus added on the label of the bottle that certifies the beer has been brewed by monks, strictly following the monastic rules of beer brewing, and that the revenues will be invested in both the monastery, the community surrounding it, and the charities associated with the Trappist Order.

Considering that six of the 11 brewing monasteries are in Belgium and two in Holland (the other three are in Italy, Austria and the United States), most of these beers are “Belgian type”: highly fermented and non-filtered, even though the American monastery in Spencer, Massachusetts, produces a much lighter beer (think of it as a “lunch” beer, to pair your main course) and the Italian Abbey at Tre Fontane brews have a distinctive eucalyptus aroma.

Now, “abbey beers,” on the other hand, are beers that even if they were indeed originally brewed by monks in their monasteries, are nowadays owned by brewing companies that bought, inherited or rightfully obtained all the rights, licenses and recipes to produce these beers. You will often find they are named after the original abbey in which they were produced, or after a saint, even though the Order has little to nothing to do with it anymore.

In any case, before you have one, remember to bless it using the official blessing of the beer (which, by the way, has been around for centuries):

V. Our help is in the name of the Lord.
R. Who made heaven and earth.
V. The Lord be with you.
R. And with thy spirit.

Bless, O Lord, this creature beer, which thou hast deigned to produce from the fat of grain: that it may be a salutary remedy to the human race, and grant through the invocation of thy holy name; that, whoever shall drink it, may gain health in body and peace in soul. Through Christ our Lord. Amen.