The Miracle of Baltimore’s Cathedral of Mary Our Queen 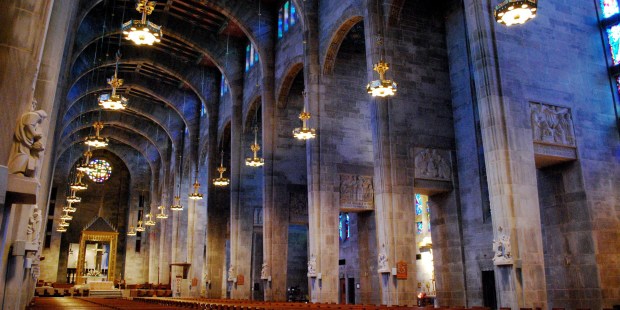 May is Mary’s month, what better way to honor her than with a domestic pilgrimage?

Thomas O’Neill was not one of them.

As the fire raged, the self-made multimillionaire and devout Catholic ran to a nearby Carmelite Convent and asked the sisters to pray with him that his building be spared. The fire stopped at the southern wall of his building.

In thanksgiving for the blessing, Thomas left two-thirds of his vast estate for the building of a new cathedral for Baltimore, and the result is the Cathedral of Mary Our Queen. This architectural wonder is a symphony of stone and glass that sings the praises of Jesus and his Mother, the Virgin Mary. It is one of the most stunning and distinctive cathedrals in the country, and one that any visitor to Baltimore should make a point of visiting.

The unique thing about this cathedral is that it mixes two architecture styles that I, for one, would never have imagined anyone mixing: Gothic and Art Deco. A Gothic church is not uncommon; think Notre Dame in Paris or St Patrick’s in New York City. Art Deco, on the other hand, is a style more often associated with Miami Beach hotels than sacred architecture. While a few architects did mingle the two, the Cathedral of Mary Our Queen presents the mix perfectly.

Made out of more than 3.5 million bricks and 70,000 pieces of limestone, the cathedral is massive. It houses more than 385 sculptures and hundreds of panels of angular stained glass that bathe the cathedral in colored light and tell the story of our salvation.

Aside from being a feast for the eyes and heart, the cathedral is, above all, a house of God. The 11-foot limestone crucifix atop the central entrance reminds us that the purpose of this building is the celebration of the sacrifice of the Mass. Below, a 20-foot bas relief of Christ the Risen King reminds us of Jesus’ triumph over death. The twelve apostles flank Jesus, holding the symbols that help us identify them, and an 8-foot statue of Mary Our Queen stands above the door, welcoming us inside. The doors are adorned with saints who had a special devotion to, or who wrote about the Blessed Mother, and surrounding them are flowers symbolic of the state and the Virgin Mary.

Inside is a Bible in stone and glass. The sturdy walls and interior buttresses are dappled with colorful light from the plentiful stained glass windows. Golden chandeliers lead our eyes to the golden baldachin in the sanctuary, a wooden crucifix hangs above the altar. Along the nave, carved into the buttresses that hold up this colossal cathedral, the Stations of the Cross accompany us as we make our way toward the altar. Above the arches of the buttresses are carved panels that portray the main feasts and celebrations of the church.

The Cathedral of Mary Our Queen has four chapels, eight side altars, and two small shrines.

The chapels are dedicated to the Blessed Sacrament, the Virgin Mary, St Joseph, and St Thomas More in the Memorial Chapel, which honors laymen whose spirit of devotion to the church was emulated by the cathedral’s benefactor, Thomas O’Neill. The side altars honor saints with ties to the archdiocese: Saints Vincent de Paul, Ignatius of Loyola, John Vianney, Sulpice, Michael the Archangel, Patrick, Peter, and Pope Pius X.

Cathedrals like this, so rich in detail and decoration, are a wonderful reminder of the timelessness of our Church and the vastness of the Communion of Saints. But the backstory of this cathedral’s creation tells a story that hearkens to Jesus’ miracle of the multiplication of the loaves and fishes. Thomas O’Neill was grateful that his business was spared that fiery morning in 1904, and fifty years later, he enabled this magnificent building to be built. Did he know how many lives it would change, how many hearts it would touch? I doubt it. But God knew. God took his fish and made this glorious monument to His love for us that keeps giving decades later.

Diana von Glahn is the co-creator of The Faithful Traveler, a travel series for television that explores Catholic sacred sites around the world. Her upcoming special on Pope Francis’ pilgrimage to the Holy Land, A Papal Pilgrimage in the Holy Land, will begin broadcasting May 2016 on CatholicTV, EWTN, Shalom World, Salt & Light, and other networks. Visit http://www.thefaithfultraveler.com for schedules.