For the First Time in 100 Years, Tortoises Roam the Galapagos 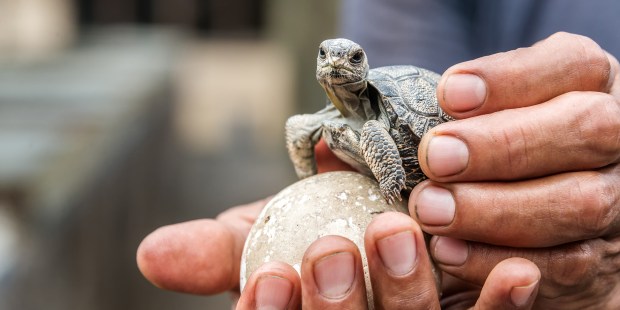 Baby tortoises appear in the islands, igniting a spark of hope after a century

This might probably be one of the best nature-related news of the last few years — well, that and the fact that the numbers of tigers in the wild is definitely on the rise: in the Pinzón Island, one of the smallest ones of the whole Galapagos Archipelago, a small group of tiny, shelled young tortoises was spotted by a group of Ecuadorian and American researchers and conservationists.

These recent births would help the already endangered species of Galapagos tortoises back from the brink of extinction: when Darwin got to the islands, there were more than 15 different kinds of giant tortoises walking around the place. Nowadays, due to the presence of humans and other foreign species (cats, dogs, rats and swines, mainly — and yes, rats do eat baby tortoises), there are only 11 species left, which depend on human aid to “live long and prosper” – ahem.  Actually, these tortoises were able to breed and grow in the wild after efforts were made to declare the island virtually “rat-free.”

Even though researchers only found 10 of these babies, there are possibly a hundred more of them, according to some projections. Taking into account that in the ’60s there were only a hundred tortoises left in the islands, and that today there are at least 500, those 10 “kids” are just the tip of the iceberg.