Priests Take Confession to the Street 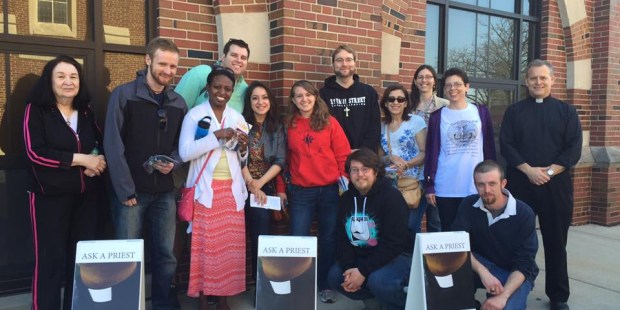 St. Paul Street Evangelization teams are bringing the Church to the highways and byways

In 2012, after a “reversion” to the Catholic faith, Steve Dawson took John Paul’s call to evangelize seriously. He began giving away miraculous medals and going with friends to a public boardwalk in Portland, Oregon, to share the Gospel. His efforts led to the founding of St. Paul Street Evangelization (SPSE), which is now based in Bloomington, Indiana, with more than 200 evangelization teams around the world, including the U.S., Canada, England, Trinidad & Tobago, Sweden, Japan and the Philippines.

“Our unofficial motto is to listen, befriend, proclaim, and invite, ” says Adam Janke, program director for SPSE. “We never know what kind of effect a simple two minute conversation will have — sometimes we never cross paths with someone again; other times our evangelists become spiritual mentors and friends. One of the first people Steve gave a miraculous medal was a young woman who changed her mind about having an abortion.”

SPSE is dedicated to responding to the mandate of Jesus to preach the Gospel to all nations by taking Catholicism to the streets.

“Each team desires to reach everyone they meet, wherever they find themselves in life,” says Janke. “We want to mobilize Catholics all over the world to overcome their fear of evangelizing and help them get outside of their comfort zones to discover just how fun and effective it is.”

Street teams typically evangelize between once a week and once a month for a few hours at a time. They look for public places like farmer’s markets, festivals, universities, or busy city streets. The time of day all depends on the team and when it’s best to reach out to the community. Thousands participate in the ministry, including bishops, priests, and religious. In fact, clergy have been playing an even greater role lately. A new SPSE initiative involves offering “street confessions.”

Ministry teams place a simple a-frame sign with the words “Ask a Priest” along with “A Catholic Priest is Available.” Below that, the sign says: “To listen, or to hear your confession, or to pray with you, or to give you a blessing.”

A team in Lansing, MI, recently brought three priests with them, along with nearly 20 evangelists earlier this month. Janke was with one priest at a movie theater last year and held his popcorn while he went to find a quiet spot with someone who asked for confession.

“As a convert, I know that it can be intimidating to seek out a priest you’ve never met before,” says Janke. “By bringing our priests out of the church and into the street, we make them much more accessible. Even those who don’t stop to talk to a priest are still seeing the witness of these priests and the joy of the people who do stop and talk with them.”

Janke points out that any priest can go out and hear confessions, but St. Paul Street Evangelization can offer resources, training materials, pamphlets and supplies useful in street evangelization. They have three dozen pamphlets on the faith, including confession, in both English and Spanish. Teams can make as many copies as they want royalty-free.

The response to the “Ask a Priest” outreach has been overwhelmingly positive.

“The public are delighted and surprised to see, in one person’s words, “real live priests” out talking to people,” says Janke. “At times we watch as people look at the sign with a quizzical look on their face and try to process it. … Sometimes they’ll turn around, come back to us, and ask if we are ‘for real’ before getting in line to talk to Father.”

Janke says teams will routinely see people come back to confession after years or even decades away. Even if no priest is available to be with them, a team member will walk with someone to a local parish and wait in the confession line with them.

The priests report back, however, that more non-Catholics stop and speak with them than Catholics — which makes sense to Janke. As a non-Catholic he found it difficult to walk into a Catholic church and speak to a priest when he was considering the Catholic faith. It took him three years of searching and studying — he describes himself as a former “anti-Catholic Baptist — before he finally knocked on the door of a parish.

“Most of my conversion process took place away from the parish. It was only after I was ready to join RCIA that I showed up at the parish office,” says Janke. “It would have been a huge blessing in my life had I seen a sign similar to this back when I was struggling with my faith.”

The priest outreach has been so fruitful, street ministry teams are ordering more priest signs and asking their pastors to join them. SPSE is also preparing to launch a free small group program this fall to help teams build “a bridge of trust from the street to the local parish.”

“We’re constantly coming up with new resources, tools, and methods based on the experience of thousands of Catholic evangelists ‘taking it to the streets,'” explains Janke.

Asked why he thinks street ministry is an effective way to bring the Church to people, Janke highlights the example of Pope Francis:

“Pope Francis recently surprised a large group of teens by offering confessions outside in Vatican City, which is what our own teams have been doing for a while,” says Janke. “When a local church establishes a street team and offers a consistent witness to the local community through street evangelization, the community gets to know them, trust them and go to them in a moment of crisis. That can be anything from an unplanned pregnancy, suicidal thoughts, material needs such as food and clothing or simply a desire to ask questions or give their lives to Jesus.”