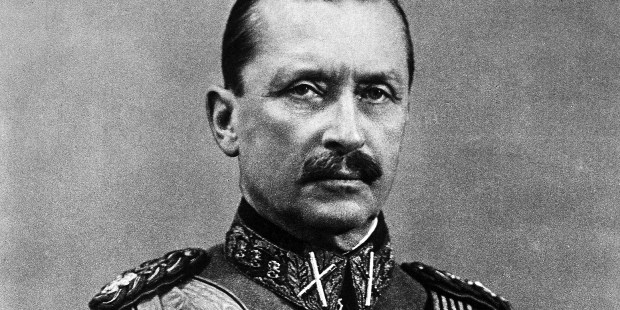 He allied his country with Nazi Germany and never said a word to defend the Jews. His relations with Hitler have been described as “chummy,” and in appreciation for his alliance, Hitler gave him a Mercedes-Benz, which he accepted, as one writer put it, “graciously.” He spent his 75th birthday in a secret meeting with Hitler, who made one of his rare trips outside Germany to see him.

And his countrymen still revere him 70years later, and rightly so. I’m writing about Carl Gustaf Emil Mannerheim, the Finnish leader during World War Two. The entertaining and impeccably liberal website Ozy recently ran an admiring story describing how he negotiated the very difficult space between Nazi Germany and Soviet Russia to keep Finland from being dominated by the first or invaded by the second.

“His only way to save Finland from Stalin’s tyranny,” Ozy explains, “was to ally himself with the Nazis, so Mannerheim played a delicate balancing game of keeping his troops strong while cordially courting Hitler’s favor without a formal alliance.”

Playing “a cat-and-mouse game,” Mannerheim worked with Hitler to create an “intricately worded ‘co-belligerency pact’ that specified how Germany and Finland, while not allies, were militarily cooperating to fight the same enemy. … Above all, it was Mannerheim’s chummy relations with Hitler that kept the Nazis at bay.”

Today, the writer concludes, “his reputation has taken on mythic proportions. … Mannerheim’s intricately primed relations with Nazi Germany saved Finland from both Stalin and Hitler — no mean feat. So while he may have struggled with marriage and friendships, he’ll forever be remembered by a grateful nation for his shrewd leadership and untiring dedication.”

Mannerheim on the highwire

It’s a great story. It’s like watching a man on the high wire holding his entire family. If he falls, everyone dies. This was a man holding his entire country. If Mannerheim had failed, Finland would have fallen under one or another of history’s worst tyrannies.

As the Pius XII expert William Doino wrote me when I sent him the article and drew the contrast with the pope: “Unlike Mannerheim, Pius XII did speak out against the Nazis racial mass murder during the war, never met Hitler, much less got ‘chummy’ with him (as did Mannerheim, at least for strategic purposes) saved many Jews, and of course famously tried to overthrow Hitler.”

So not Hitler’s pope. Especially if, as some people have argued, Pius not only worked to overthrow Hitler but agreed to his being assassinated. Hitler certainly felt no fondness for Pius.

Doino points out (in a note to me) that “Pius XII was one of Hitler’s greatest enemies, and that is now being widely recognized.” He predicts “the remnants of prejudice will eventually be overcome as well.” I hope he’s right, but among mainstream academics and journalists the idea that the wartime pope somehow favored the Nazis is now one of those things everyone knows.

The answer to your excellent question: Because Pius was Catholic and because he was the pope. That the pope sucked up to Hitler is too ideologically convenient a myth for secularist evangelists to give up. The pope was a coward! He didn’t like Jews! He covered his own backside! So who cares what the present pope says about morality?

It’s a matter of selective reading, and that makes the deception easy. What’s heroism in the Finnish leader is villainy in the Catholic leader. The actions of the first get interpreted in historical context, the actions of the second get spun with the worst possible reading given every single thing he did. No one writes about Mannerheim as I did in the first paragraph, but nearly every major secular source writes about Pius that way.

But what if opportunistic secularists wrote about Pius the way the Ozy writer wrote about the Finnish national hero: as a man engaged in a delicate balancing act and playing a cat-and-mouse game, relying on intricately worded agreements to keep the enemy in check, who created intricately primed relations with his enemies in order to save what he could save, who was a shrewd leader of untiring dedication? His reputation might take on mythic proportions.

But don’t hold your breath.