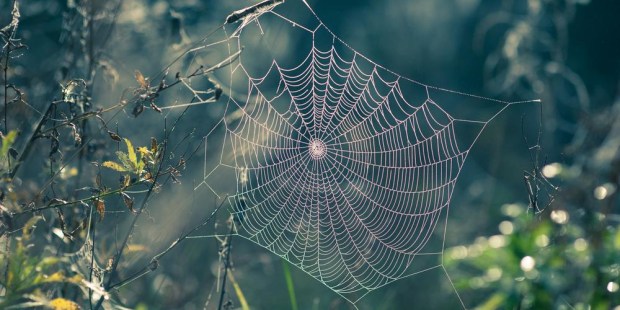 [The following is a translation of a video that has been traveling through Facebook. It features a Catholic priest, speaking in Spanish, and sharing his insights after watching a documentary on spiders. His message is well worth reading, and we bring this to you thanks to a translation by Thomas Sanjurjo, reprinted here with kind permission. – Ed]

I saw a program on National Geographic about spiders, it was very interesting. Now, spiders are horrendous creatures, but there are some things we can learn from them. You see it come down on a single strand and then from there spread out strands in a surrounding pattern. Then it weaves more strands to stitch all of those strands together.

When it finishes, it’s done, but what happens if the rain or the wind breaks a strand in the web? Nothing. The spider instinctively rebuilds the web.

For this reason you can see beautiful spider webs, that have no spider in them; you can also see webs that are tattered and torn, and there’s the spider.

When I saw this on National Geographic I said, “That’s just how we are as men and women.” We come down on a single thread, that’s our dependence on God. Every thread of your life can break, but if you are still held up by God, everything in your life can be rebuilt. But if you aren’t being supported by God, your life will have lost meaning.

I also see lives destroyed by tiny little things, because they weren’t held up by God. By tiny little things that you’d say, “This other guy here just came out of a huge problem and he’s still with his wife, but you’ve ruined your marriage for that stupid mistake.” And you see who has God and who’s without him. Children who can’t resist a temptation, all because they don’t have God.

I leave you with this: be spiders, and never let go of God.