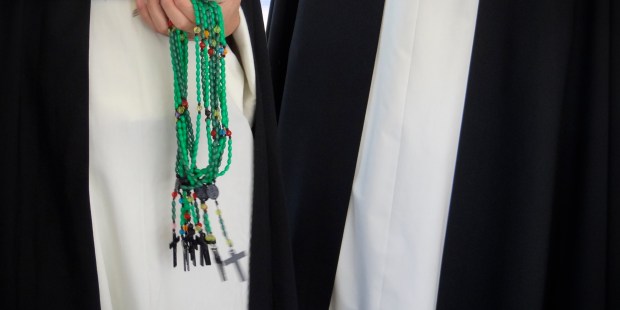 “The magic makes me very disoriented,” says a man who needs a rosary.

In this Holy Year we look forward to the experience of opening our hearts to those living on the outermost fringes of society.—Pope Francis, Misericordiae Vultus, par. 15.

When I spotted them standing on the downtown Denver street corner handing out pamphlets, I kept my eyes down so as not to be accosted by what I thought were Jehovah’s Witnesses. But as soon as I heard the young man say to a passerby: “If you’d like to learn more about the Catholic faith …” I stopped dead in my tracks.

“It’s not very often that you see Catholics on the street handing out flyers about the faith,” I offered with a smile, extending my hand to introduce myself to the brave evangelist. “What group are you with?”

John shared that he was a seminarian at the nearby St. John Vianney Seminary and that he’d recently been ordained a deacon. In evangelization training with St. Paul Street Evangelization, he was there with a group of soon-to-be ordained priests trying to engage passers-by in a non-confrontational conversation about Jesus Christ and the Church, hopefully planting seeds for them to learn more about both.

A disheveled, confused-looking young man with a devil’s face on his T-shirt and the word “DEMON” tattooed in large letters on his bicep approached. “Dude, can I have one of those?”

John happily offered him a rosary, which the young man proceeded to place around his neck while explaining that he is a Wiccan who uses magic on people. “I only use good magic, but there are others in my coven who are infernal. The magic makes me very disoriented, because it takes so much out of me.”

The rosary-adorned Wiccan quickly moved to another group of seminarians to seek more goods, and John, my daughter, Kara, and I joined our voices in prayer for his soul. Before long he reappeared wanting to hear more about Mary, the Mother of God. “Wicca has a great mother in its religion too,” he informed us. “We call on her for help.”

Suddenly, I remembered a story I’d read on the Internet about a former Satanic high priest who was awakened to the truth of Jesus Christ via a Miraculous Medal given to him in a shopping mall. I quickly dug into my backpack and found a small white envelope with the words “Blessed Miraculous Medal” on the front and gave it to him.

“Here you go,” I said, placing the envelope in his hands. “Mary is the Mother of Jesus Christ. Remember to call on her if you ever need help.”

He smiled, took the medal out, and then placed it on a beaded chain that fit snugly around his forehead. Off he meandered down the street sporting the rosary around his neck and the Miraculous Medal on his forehead — with us praying a “Hail Mary” for his conversion.

“What led you to the priesthood?” I asked Deacon John after the Wiccan visitor left.

“It was attending Denver’s World Youth Day in 1993 with Pope John Paul II. Following his visit, it was like a wave of the Holy Spirit came through the whole city and nothing has been the same since. There’s a lot of strange stuff in this city, but there’s a profound Catholic presence also. God is really moving here.”

Deacon John and I said our good-byes, and I walked into the corner department store I originally intended to enter to resume shopping with my daughters.

“Is there anything left in this world that will satisfy me?” a song screamed from the store’s speakers, seeming to speak right to the confused young Wiccan we’d just met on the street corner, as well as to all of the searching people in the world. I thought of John Paul II’s words to the Church on World Mission Sunday in 1985. “Jesus alone can satisfy humanity’s hunger for love.” Jesus alone, I prayed.

Judy Landrieu Klein is an author, theologian, inspirational speaker, widow and newlywed whose book, Miracle Man, was an Amazon Kindle best-seller in Catholicism. She blogs at memorareministries.com.