Up From the Footprint of God: Ascension Thoughts 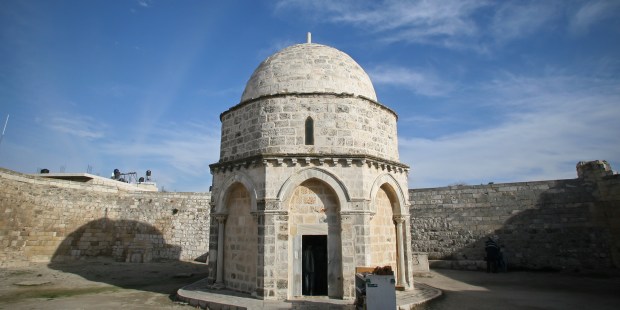 Christ, raised and glorified, has gone to his Father to watch for us, wait for us and welcome us. But the saga is not over

Outside Jerusalem, there is a place where you can go to see the footprint of God.

It is on the hill where tradition tells us Jesus ascended to heaven. Mt. Olivet, the scripture calls it. There, inside a small domed shrine, not much larger than a suburban garage, you will find on the floor a yellowed, rough-hewn stone encased in glass. And on that stone, so they say, if you look long  and hard enough, you can see the final imprint that Christ made on the earth: the outline of his foot as he touched the ground one last time and was lifted to the skies.

When I visited the site a few years ago, I couldn’t fail to sense I was seeing something extraordinary and mysterious. One of the tourists in our group was moved to tears. Others were speechless. The little shrine was hushed and almost empty. A lone sentinel, an aging Israeli guide, stood along a wall, watching us. Beside the fabled stone was a plate, on which visitors had tossed dollars and coins.

I bent over the rock and looked closely. I studied it. I looked at it from different angles. Finally, I stood up and sighed.

I couldn’t see a thing.

As we drove back to the hotel, I worried that I lacked the faith to see what, to others, had been so manifestly clear. I wondered if there was something wrong with me. I wanted to see something incredible. I didn’t. I was disappointed.

But I remember that shrine, and that stone, every year when we celebrate the Ascension. Sometimes, I’ll open the photo album from our trip and look at that rock and struggle to see something resembling a foot. I never do.

I can’t help but place myself there again, when I hear the familiar reading from the beginning of Acts. Jesus has ascended. His followers are staring at the skies in disbelief. Clouds are scurrying by. Maybe the birds pause in flight. Is that a dove joining Him? I imagine the apostles are seeing the soles of his feet — pierced, but healed — and that he is getting smaller and smaller as he vanishes from sight.

“While they were looking intently at the sky as he was going, suddenly two men dressed in white garments stood beside them. They said, ‘Men of Galilee, why are you standing there looking at the sky? This Jesus who has been taken up from you into heaven will return in the same way as you have seen him go into heaven.’”

“Why are you looking at the sky?” Why, I wonder, have I been staring at a rock on the ground?

I’ve come to realize that the most enduring footprints of Christ are not to be found on a pebbled hilltop in the Middle East. They are not on stone or clay. I’m not sure you can even take a picture of them. They are the footprints he has left on lives. And they are everywhere — too numerous, really, to count.

You will find them in New York City, at the Catholic Worker, where volunteers ladle soup every day to dozens of homeless men and women. His footprints are there, in the soup line.

You will find his footprints on the marble floors of great cathedrals, and on the plain planks of roadside chapels, where believers of many faiths gather to sit and kneel, to listen and pray.

You will find them on the floors of nurseries where mothers walk all night caring for their sick infants, and on the coffee-stained carpets of church basements, where weekly AA meetings are held; they are found in velvet-draped reconciliation rooms where burdens are emptied; they are in diners and laundromats, in bus stations and on train platforms, in crisis centers and nail salons.

Look carefully. You might even find them in your own living room.

Mark’s gospel tells us that after Jesus was taken into heaven, the apostles went forth and preached “while the Lord worked with them.” If they were bewildered by what they had seen, it didn’t last long. After staring at the heavens, they lowered their gaze, looked around and realized they had work to do.

The apostles, we’re told, returned to the upper room to pray and ponder. They had in their minds the haunting and harrowing image of their disappearing savior, a man who walked among them being pulled from their grasp one final time, lifted beyond their reach forever. They could only imagine what lay ahead.

We can understand their sense of disorientation. We gaze around ourselves and see the work waiting to be done. Soon, the Spirit will join us, bringing fire and wind, wisdom and hope.

Pentecost beckons. We are to move from this mysterious place, just as the apostles did 20 centuries ago, heading toward our own unknowable destinies — each of us trudging from our own Olivet, still seeking out the footprints of Christ.