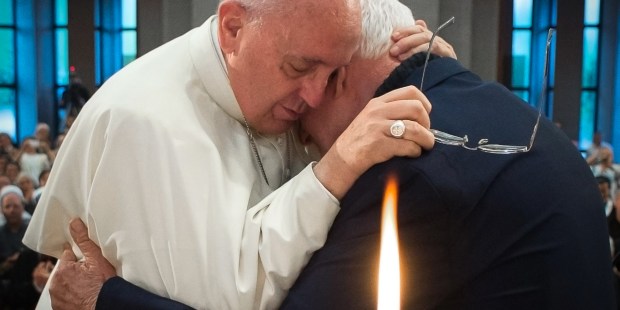 Pope Francis has again kissed the hands of Father Ernest Simoni, the Albanian priest who spent 28 years in prison for being faithful to the Church during the Communist regime.

The visibly moved Bishop of Rome met the priest some days ago, after the general audience of April 20, in St. Peter’s Square.

“This is an Albanian martyr,” the Pope said when he saw him.

The Pope has met this priest before. And once again, he pressed his forehead to the forehead of the living martyr.

They first met on Nov. 21, 2014, in Tirana; the Holy Father cried when Fr. Simoni gave his testimony about the torture he suffered for refusing to deny Christ.

“The Pope immediately remembered Father Ernest,” Italian author Mimmo Muolo of Avvenire told Aleteia. “He addressed him with his last name, ‘Simoni!’ and indicated that he remembered the story of his persecution, recounted in the cathedral of Tirana in 2014.”

“Obviously, Fr. Ernest did everything he could so that the Holy Father wouldn’t kiss his hands, at the same time, trying to kiss those of the Pope,” Muolo remarked.