The Forgiveness Jar and 70 Times 7 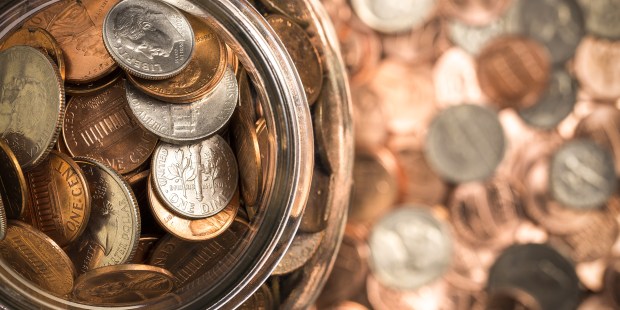 Last week my 12-year-old and 10-year-old went to war with each other. They know they’re not supposed to hit or scratch or fight, but both had their blood up, and it was bad. Separating them, I felt the pain of wondering, How do I teach them this should never happen?

I put Band-aids on the scratches, but the wounds they’d left on their relationship were deeper.

I took them outside and gave each a piece of chalk. I told them to mark out 490 lines, in sets of five. This would be their punishment. “For each one,” I added, “I want you to say, either out loud or in your head, ‘I forgive you.’”

At first they objected, but I assured them they wouldn’t be coming inside until they’d done the project. “Why 490?” my 12-year-old asked.

“I’ll tell you when you’re finished,” I said and went back inside.

I pulled up “Seventy times seven,” from the Gospel of Matthew, 18:21-22. “Lord, if my brother sins against me, how often must I forgive? As many as seven times?”

It takes a while to draw 490 lines, but when they finished, I showed them the passage. After they rolled their eyes, it was clear they both felt better about each other.

But I sat looking at the chalk lines in the driveway, realizing how hard it is to recognize God’s infinite desire for us to show mercy to each other.

I wanted to make sure not just the two in the fight got the message. So the next day, I went to the bank and took out five dollars in pennies and took away 10. The kids looked at the rolls of coins. “What’s this?” one of them asked.

I put a jar next to the pennies. “This is a forgiveness jar. When you forgive someone in this family, put a penny in the jar.”

“Technically,” my 14-year-old began, “you should have five dollars in pennies for each one of us, minus 10 cents. That would be [she multiplied for the 10 of them plus mom and dad, relishing the moment to show off] sixty dollars in pennies, minus a dollar twenty.”

I was losing the moment.

“No.” I groaned, putting the first penny in the jar. “But when we fill it, when we’ve forgiven each other this many times, we will go out for ice cream or something special.”

The younger ones scampered off to get pennies from various places to start seeding the jar. “You have to forgive someone to put the pennies in,” I reminded.

I know, it’s one of those parent things we do to try and keep kids focusing on the reality of a faith made life. And I don’t know that it will sink in deeper.

But if even one of my 10 puts even one penny in the jar because they recognized they’ve forgiven someone, it will have been worth it. Those coins will be treasure in heaven.

[Editor’s Note: Take the Poll – Daily Poll: Do You Use the Jar System]