Online Exclusive: What John Paul II Intended to Say the Day He Was Shot 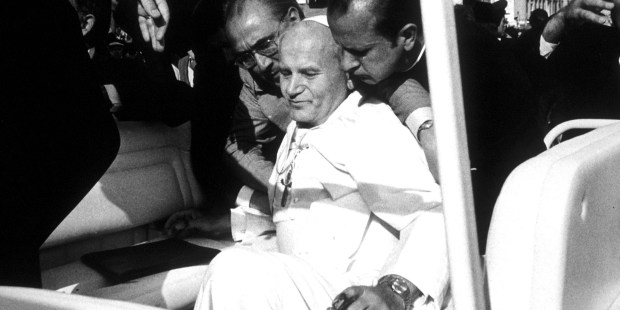 35 years after his assassination attempt, the catechesis and two important announcements JPII never made that fateful day

VATICAN CITY — Thirty-five years ago, on May 13, 1981, Pope John Paul II was shot as he made his way through St. Peter’s Square in the pope-mobile, responding to the warm greetings of the faithful and pilgrims before the general audience. At 5:19pm, the pope was the victim of an assassination attempt perpetrated by a young Turkish man named Mehmet Ali Agca.

During the general audience, the Holy Father had intended to speak to the faithful about a theme very dear to him and to the Church: that of work and workers, on the occasion of the 90th anniversary of the publication of “Rerum Novarum” — the great encyclical of Pope Leo XIII. He also intended to make two important announcements on his initiatives to defend and protect marriage and family life.

May 13, 2016 marks the 35th anniversary of the assassination attempt against Pope St. John Paul II. The pope attributed his survival to the direct intervention of the Mother of God. Indeed, one of the would-be assassin’s bullets is poignantly now enshrined in Our Lady’s crown in Fatima.

The official text Pope John Paul II was to deliver that day has for some time been available on the Vatican’s official website in Italian, Spanish, and Portuguese, but not in English.

Wishing to commemorate these two anniversaries, Aleteia offers this English translation of the catechesis John Paul II never delivered that fateful day, and the two important announcements he would have made at the end of the general audience.

1. In recent weeks, during our meetings at the Wednesday general audiences, I have given a series of reflections based on the words of Christ in the Sermon on the Mount.

Today, beloved brothers and sisters in Christ, I want to begin a series of reflections on another theme, in order worthily to emphasize a date which deserves to be written in golden letters in the history of the modern Church: May 15, 1891. It has in fact been 90 years since my predecessor, Leo XIII, published the foundational social encyclical Rerum Novarum, which was not only a vigorous and heartfelt condemnation of the “unmerited misery” in which workers then lived, after the first period of implementation of the industrial machine in the field of enterprise, but especially laid the foundations for a just solution to the serious problems of human coexistence which fall under the name of “social issues.”

2. Why, after so many years, does the Church still recall the encyclical Rerum Novarum?

There are many reasons. First, Rerum Novarum constitutes, and is, “the Magna Carta of Christian of Christian social activity,” as Pius XII called it (Pius XII, Radio Message for the 50th anniversary of Rerum Novarum: Addresses and Radio Messages, III [1942] 911); and Paul VI added that his “message continues to inspire action aimed at justice” (cf. Paul VI, Octogesima Adveniens, 1) in the Church and the modern world. It is also an irrefutable demonstration of the Church’s anxious and eager attention to the world of work.

The voice of Leo XIII rose courageously in defense of the oppressed, the poor, the humble, and the exploited. It was but the echo of the voice of Him who had proclaimed blessed the poor and those who hunger for justice. The Pope, following the impulse and invitation “of the responsibility of his Apostolic Ministry” (cf. Leo XIII, Rerum Novarum, 2), spoke: not only did he have the right, but also and above all, the duty to do so. What justifies the intervention of the Church and her Supreme Pastor in social matters, in fact, is always the mission received by Christ to save man in his full dignity.