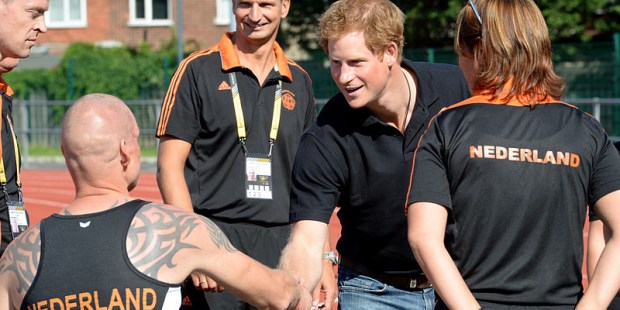 Game on! Diplomacy just got interesting this week when a playful “social media war” between Prince Harry and the Obamas erupted, and even brought Her Majesty the Queen into the fray.

Both sides have been challenging each other to the Invictus Games, a Paralympics-styled sporting championship in which wounded servicemen and women compete. The online battle began when President Obama and the First Lady recorded a video meant to throw a gauntlet, and a little shade, toward the U.K. Invictus team. Behind the Obamas, servicemen and -women pantomime a mic-drop, saying, “Boom!”

Prince Harry shows the video to his grandmother, Queen Elizabeth II, who smiles like a woman who has seen it all and fears nothing. “Boom, really,” she says. “Please …”

All joking aside, the video is meant to publicize the beautiful and inspiring Invictus Games, of which Prince Harry is both founder and president. He launched the initiative in 2014  after witnessing the Warrior Games in the U.S. Prince Harry said that the games “focus on what [soldiers] can achieve post-injury and celebrate their fighting spirit through an inclusive sporting competition that recognizes the sacrifice they have made.”

Wounded veterans are too often disregarded or forgotten by society. These competitions bring them forward with dignity, as examples of breathtaking fortitude.

As a veteran of a 10-year military career that included two tours in Afghanistan where he was known as “Captain Harry Wales,” the prince is very familiar with the sacrifices of the battlefield. In a recent interview with People magazine, he said his desire to develop the games was born of the “powerlessness” he felt when he wasn’t able to save lives on the battlefield. He recalled, “You turn up and you think you’re invincible in a super-duper aircraft, but you’re helpless. … [Creating the Games] was almost like a cure for that pain I had back then.”

Additionally, Harry expressed a wish to make his mother, the late Princess Diana, proud by following her example of charitable action. “That’s all I’ve ever wanted to do,” he explained. “I know I’ve got a lot of my mother in me. I am doing a lot of things that she would probably do.”

This year the Invictus Games will bring more than 400 para-athletes from 15 countries to Orlando, where the contests run from May 8-12. Harry insists that his trip won’t be complete without a stop at Disney World, which he visited as a child with his mother. This time around, he joked, he will come prepared to prove his lineage, as American children don’t believe him when he says he is a prince.

“Every time I get to meet kids and they have been told a real-life prince is coming, the disappointment on their faces when they see me without a crown or without a cape … you can tell in the U.K. and across the world that they are genuinely disappointed, because they live in this fairy-tale land! So I am going to pack a crown and a cape this time and some funny pointy-toed shoes.”