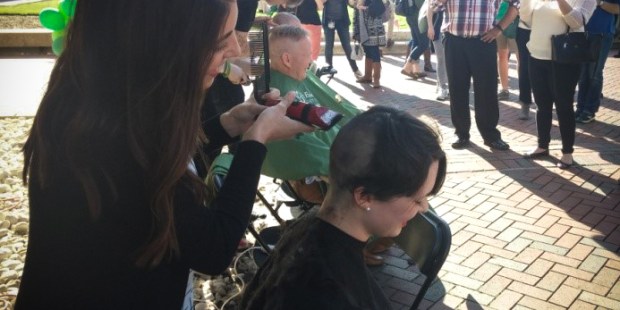 Until yesterday I had never seen her without hair. I remember one of my first glimpses of her when the ultrasound tech gasped, “Look at all that hair!” But today, at 18, she has even less hair than the proverbial billiard ball.

It was love of her childhood friend and a desire to support her that stirred my daughter to have her head shaved as a fundraiser for childhood and young adult cancer. Her dear friend of half her young life is fighting lymphoma and has lost her hair to the chemotherapy that will very shortly make her well. My daughter didn’t want her friend to have to climb that hill alone, so she got out of her comfort zone and took an action that, for the next few months anyway, will draw the kind of attention to herself that she would rather not have.

I was impressed, not just by her selfless bravery in the face of a girl’s worst hairstyle nightmare, but by the consistently pro-life way she approached this commitment. My daughter wanted to do more than merely accompany her friend. She wanted to make a real change that could bring about some concrete good in the world in a bioethical way. She made sure to participate in a research fundraiser that did not support embryonic stem cell research. My daughter was willing to get out of her fashion comfort zone, but not to ignore her conscience by helping sick children at the expense of the youngest ones.

We chatted following the event in her godmother’s kitchen after a festive meal of capellini (little hairs) pasta about how different the world would be if more pro-life people would step out of their comfort zones and take action.

Here are three things you can do in the next two minutes that, while they may take you out of your comfort zone, will not harm a hair on your head.

Amy McInerny is the Executive Director of National Committee for a Human Life Amendment whose initiative HumanLifeActionCenter.org makes it easy for grassroots pro-lifers to be a voice for the voiceless. Follow on Twitter @HumanLifeAction