Help! My Boyfriend Says I’m Too Worldly in My Tastes and Friends! 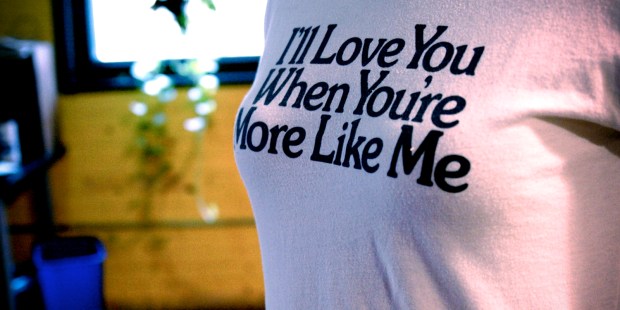 When your romantic partner accuses you of loving the world more than God (or him, or her), what do you do?

My boyfriend says I am too “worldly.” He only listens to Christian music and the only books he reads are by Christian authors and are about Christianity. He won’t even see movies unless it’s something like Fireproof or The Blind Side. I love all types of music and enjoy going to the movies and concerts. He is very active at his church and involved there. He also prays regularly and encourages me in my faith as well. It’s those traits that attracted me to him in the first place. But lately our relationship has become strained because of, according to him, my “worldliness.”

I have several friends, and some family members, he doesn’t approve of because they are atheists or are pro-choice. He specifically said that if our relationship were to progress any further these friends and family would have to go since they are negative influences. We’ve only been dating six months but I love him very much. I am afraid if we ever got married, all the things I like would also have to go.

I’ve tried talking to him about it but he says it makes him sad that this is even an issue, either I love him and God more than the “world” or I don’t. It’s not like I listen to music with explicit lyrics and watch R-rated movies all the time. I’m actually pretty conservative in my entertainment choices, but I hate that this is putting a strain on our relationship. What do you make of our situation?

Signed,
A Good Man Is Hard to Find

Dear A Good Man Is Hard to Find,

Of course, I don’t know exactly what your entertainment choices are, but from your own description, your boyfriend sounds like a very faithful, devout man. So this could be the classic case of control or you could have a wonderful man that cares about your spiritual well-being.

Some concerns I have, though, are that he would think it all right to make you choose between established friendships and family members and your relationship with him. He also passive-aggressively shuts down any discussion on the topic because he claims it makes him feel “sad.” He’s using his hurt feelings to prevent you from bringing your own point-of-view to the discussion. His unwillingness to even have a mature, fair discussion on the matter is a major red flag.

I don’t doubt that you two have genuine feelings for each other and probably complement each other in many other ways, but I am afraid that if you can’t have a meaningful discussion on respecting each other’s expressions of faith there isn’t going to be much of a viable future for your relationship.

What it boils down to is respect. It sounds like he  doesn’t respect your decisions and questions the authenticity of your religious life simply because it doesn’t exactly mimic his own.

Just because something isn’t specifically labeled as “Christian” doesn’t necessarily make it un-Christian or spiritually harmful. There will always people will look at the Sistine Chapel and only see lewdness and nudity.

Again, however, my advice is based solely from your perspective. I am not at the advantage of knowing exactly what you enjoy that he objects to but as a practicing Catholic you do have a duty to practice custody of the eyes.

“At its most basic level, custody of the eyes simply means controlling what you allow yourself to see. It means guarding your sense of sight carefully, realizing that what you view will leave an indelible mark on your soul.” (Sam Guzman)

Before you’re so quick to dismiss each other, sit down and make a list of your viewing habits. Maybe there is a legitimate cause of concern there to which you’ve become desensitized, which can happen. That would be my advice — take an honest accounting of your entertainment influences and perhaps negotiate a compromise with your boyfriend.  If there is something truly offensive you enjoy watching on TV would it really hurt you to stop watching? Do the friends and family your boyfriend objects to openly mock your religion and your views on the sanctity of life? Some friends can be bad for us. Some family, too.

Before you initiate another talk on the topic do some serious research into your other relationships, honestly look at your habits, and pray about it at adoration. Then approach your boyfriend and let him know you’ve seriously thought and prayed on it and considered his opinion instead of approaching him on the defensive, as it sounds you may have done in the past.

Like I said, it boils down to respect. You want him to respect your opinions, show him that you respect his. Rarely when couples argue is one party completely blameless. Usually both have legitimate claims. You say you love him, so give it shot.

I wish you both the best.

Katrina Fernandez has a PhD in being single, and a master’s in single parenting with a concentration in Catholic guilt. She’s been writing about these and other life-survival topics for more than a decade. Submit all questions to katrinafixesitforyou@gmail.com.