Takayama Ukon: The Catholic Samurai on the Path to Sainthood 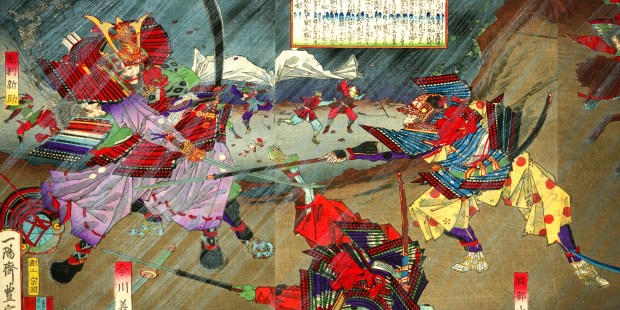 In August 2013 the Japanese Bishops presented to the Vatican Congregation for the Causes of Saints a 400-page report including all the needed documents for the beatification of Takayama Ukon, a sixteenth-century Japanese daimyo (that is, a feudal lord) who chose to lose his privileges and property before giving up the Catholic faith he had embraced when he was 12 years old. In January of this year, Pope Francis signed the decree approving their request.

Takayama Ukon (or, if you prefer, Dom Justo Takayama, the name he assumed when baptized) was born to be the heir and lord of Castle Sawa, in the Japanese province of Yamato. His father, Lord Tomoteru, was a man of a deep religious mind, and had invited a Jesuit, Father Gaspare Di Lella, to his castle to debate the virtues of Buddhism and Christianity. It was 1564, fifteen years after the first Portuguese ships arrived in Japan and, with them, some Jesuits from St. Francis Xavier’s missions. Impressed by the Jesuit’s preaching, Lord Tomoteru and his family converted to Catholicism.

Justo and his father, who was baptized as Darío, fought serving Lord Nobunaga, who granted them permission to be Kirishitan Daimyo, that is, Christian feudal lords, with the right to practice and spread their faith if they wanted to do so. Many of Justo’s fellow samurai and serfs converted to Christianity.

However, Nobunaga’s successor, Totoyomi Hideyoshi, the great unifier of Japan, prohibited Christianity and exiled the missionaries. Many Kirishitan Daimyo obeyed Nobunaga’s orders and apostatized, but Takayama abandoned his title, land and possessions instead. With 300 other Japanese Christians Takayama was exiled on November 8, 1614, to the Philippines, where he died a few days later after being warmly received by the Spanish Jesuits.