Breathtaking Photos: The Vatican’s Gallery of the Maps

Visitors to the Vatican Museums are susceptible to a curious illusion. After a long walk through antiquities and tapestries, many reach the entrance to the Gallery of the Geographical Maps, where they stop abruptly (usually blocking the doorway), whip out cameras, and ask in awe, “Is this the Sistine Chapel?”

This “Gallery of the Maps Syndrome” is bound to reach epidemic levels after the restoration completed on April 23, which involved four years of careful and creative solutions to problems ranging from detached frescoes to pigments reduced to powder. Funded by the California Patrons of the Vatican Museums, the revitalized gallery is breathtaking. One suspects that the gallery’s original patron, Pope Gregory XIII Boncompagni, would be pleased to know that his contribution to the collection still amazes sophisticated modern visitors, especially since the next threshold is actually that of the Sistine Chapel.

The Gallery of the Geographical Maps was a papal tour de force for its size, scope, speed and style. At 120 meters it is longer than a football field, yet the magnificent frescoes articulate the space with an elegant rhythm. The hall itself was designed by Ottaviano Mascherino for Pope Gregory XIII who wanted to link his new astronomical observatory, “The Tower of the Winds,” with the apostolic palace, so his guests would walk amidst terrestrial maps before climbing to observe the heavens.

During the Renaissance, maps often graced the walls of palaces of power. The ambitious mappamondo by Ambrogio Lorenzetti presided over the city hall of Siena, and the Medici Dukes covered the inner sanctum of their Palazzo Vecchio with maps of all the known world in the 1570s. The Medici cosmographer, Egnazio Danti OP, was then recruited by Pope Gregory for the Vatican gallery.

These Vatican maps focused solely on Italy, divided into 40 political regions stretching down the hall. At 15 by 16 feet in size, they provide a Cinemascope-like panorama of each territory while also highlighting enchanting details.

The maps use a bird’s-eye perspective, and it takes a moment to remember that this “Google Earth” was made without satellites or even aerial photography, which underscores the prowess of the creators. Delicate dashes of white and brief brushstrokes of shadow give the impression of topographical relief. Towns, villages and even hamlets are painted with remarkable accuracy, and close inspection reveals historical incidents occurring in each area. Hannibal and his elephants are shown defeating the Romans outside Piacenza, and the Papal court returning from Avignon is in a busy procession both on land and along the Rhone.

Egnazio Danti was not only engaged in the mastery of space during this period, he was also wrestling with the ordering of time. While supervising the production of the maps, he was also part of the commission todevelop the Gregorian calendar, which would give greater accuracy to chronometry.

The gallery was executed in record time, taking only two years, 1580-1582, to paint the maps and craft the exuberant vault decoration. This was thanks to the team of decorators led by Girolamo Muziano and including Cesare Nebbia as well as Paul and Matthijs Brill among the first landscape painters. The speed of the recent restoration was also remarkable – four years – despite serious structural issues and ever-evolving challenges. The swiftness of the restoration owed much to the teamwork of a group of 20 young restorers led by Maestra Maria Putska and Maestro Francesco Prantera, who also charted new artistic territory using only natural products for the project and developing innovative cleaning solutions such as a glue made from Japanese seaweed to preserve original pigment.

But after the how, comes the wow. The effect of these maps, emerald green floating against a lapis ground, is enhanced by the large windows on either side. One sees sky, land and sea at once as if floating above the great Italian peninsula. The still masses of land give way to the boisterous vault décor. Gilt stucco frames colorful grotesque designs and faux bronze reliefs of Biblical scenes while indigenous birds perch nearby. The giddy effusiveness of the décor recedes around the series of narrative panels above the maps. Each scene recounts a famous miracle which took place in the map below. Some focus on apparitions and sacraments: St Clare stopping a siege with the consecrated Host in Assisi, St Michael appearing at Mt Gargano in Puglia. Others recount the Christianization of Italy: St Paul converting Publius in Malta before departing for Rome on one end of the gallery and Constantine’s vision and conversion at the other.

Thus the gallery of maps serves to illustrate both man’s achievements in ordering his natural world of space and time, and God’s propensityto occasionally upend it. On one hand, this carefully arranged program is the precursor to the easy mix of temporal and divine of the Baroque; on the other, it is great advertisement for Italy as having more saints and miracles per square mile than anywhere else in the world!

Pope Gregory’s maps show a beautiful, mighty and unified Italy, not yet politically (that would not happen until 1870), but drawn together under a common Catholic banner. The Pope may have not been the ruler of all he surveyed, but he was the spiritual leader of this peninsula where God has showered so much favor.

Like most of the art in the Vatican, the Gallery of the Maps offers visitors both delight and an opportunity for reflection. Unfortunately, most of the 6 million visitors a year, once their initial misconception has been corrected, usually race through the hall to the finish line of the Sistine Chapel.

Some advice? Let the masses run for the Sistine chapel. In the map gallery, enjoy a leisurely stroll through this wondrous land enjoying its cities, its history, its beauty and its examples of holiness. Like all good journeys, it is meant to be relished, not just finished.

Check out the photo gallery  !!! 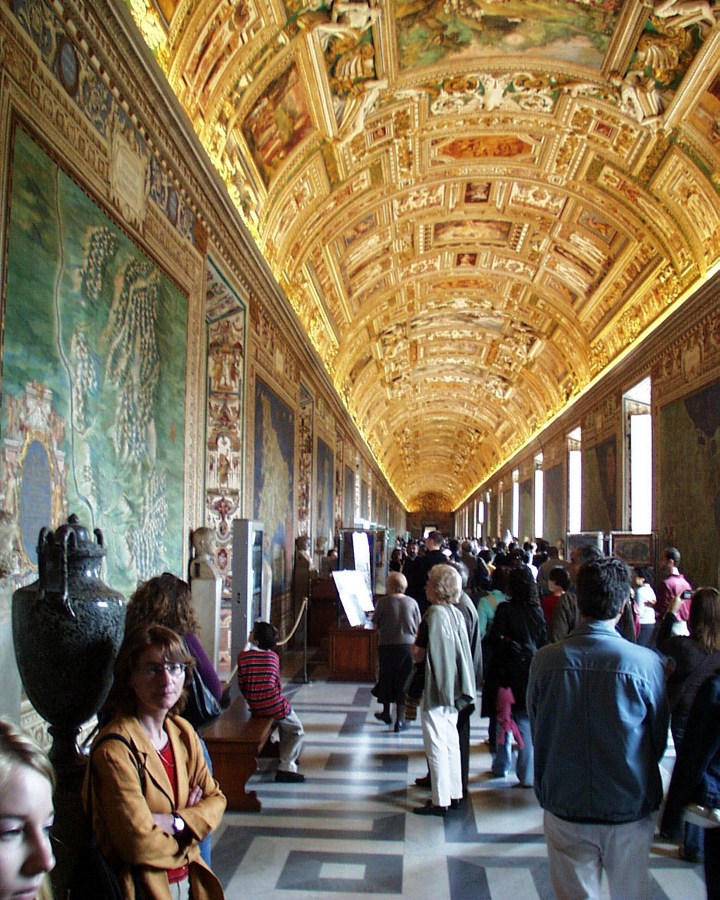