Gregory Porter’s Soulful New Album Takes Us to the Alley 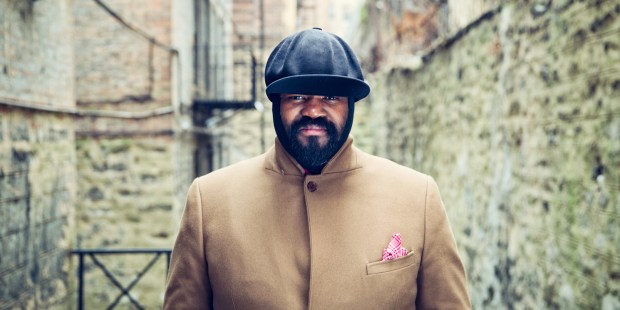 The singer’s light of faith shines on the darkness

There are few voices in music as poised and expressive as Gregory Porter’s.

Porter, who won the Grammy for Best Jazz Vocal Album for Liquid Spirit in 2014 after signing with Blue Note the year before, continues to make music that is something like the Platonic ideal of jazz. His sound is intimate, wise, and eminently soulful. He may be instantly recognizable from the balaclava-hat he always wears to cover up scars from skin surgery; but after you hear him sing, it’s his voice that stays with you.

His latest record, Take Me to the Alley, opens up with an original acoustic take on “Holding On,” which became a megahit in the UK after his vocals were flipped by British electronic duo Disclosure. But the elemental sound Porter has constructed with his longtime producer is more suited to daydreaming than dancing. Traces of soul and R&B bring flashes of energy, as on “Don’t Lose Your Steam,” a letter penned by Porter to his three-year-old son. But like 2012’s Be Good, the album on a whole is warm and contemplative, filled with verses about romance, family, the slings and arrow of time, and the “consequence of love.”

What’s most remarkable about Take Me to the Alley, though, is its political subtext. The album cover – the yellow and white text, the greenish city landscape, the singer looking off into the distance with his collar up – brings to mind Marvin Gaye’s politically charged classic What’s Going On. “That word doesn’t scare me,” Porter says in an interview. “There is some political conversation on the record.”

“Fan the Flames,” for example, is a rousing tribute to non-violent protest:

Tear down the walls of hate

Fill up the empty bowls of the hungry

Break the sacks and let the rice run free

Crack the backs of the tax for me

Stand up on the seat with your dirty feet

Raise your fist in the air and be sweet

But it’s on the title track – a tribute to society’s lowly ones, to the brokenhearted and crushed and spirit – that Porter really soars:

Well, they guild their houses in preparation for the king

And they line the sidewalks with every sort of shiny thing

But they will be surprised when they hear him say

Take me to the alley

Take me to the afflicted ones

Take me to the lonely ones that somehow lost their way

Let them hear me say ‘I am your friend’

Come to my table, rest here in my garden

You will have a pardon

“When I say take me to the alley,” Porter explains, “I mean in every city there might not be a physical alley. It may be just those forgotten places. Those dark places. Those neglected places that need to be elevated and illuminated in a way. That’s a conversation maybe about poor people, minorities. It may be a conversation about people addicted to something. It might be about an area that receives less than the support that it should have. Whatever place needs to be elevated and lifted up in some kind of way and brought to a good standard: that’s the alley.”

Porter’s words bring to mind what Cardinal Dolan (inspired by Al Smith) once said about the “uns” of society: “the unemployed, the uninsured, the unwanted, the unwed mother, and her innocent, fragile, unborn baby in her womb, the undocumented, the unhoused, the unhealthy, the unfed, the undereducated.” A government can be judged by how well it takes care of these “uns” – but, “when all is said and done, it’s in God we trust.”

So too with Porter’s image of “the king” identifying with and caring for his people. The Irish Examiner calls the title track an “unabashedly religious song about Christ’s compassion and charity, channeling the gospel tradition,” while the Guardian goes a step further and sees it as a “parable about the second coming of Christ.”

Porter grew up singing gospel in the Baptist church where his mother ministered to the hungry and homeless. That influence illuminates this album – not just musically, but lyrically. On “More Than a Woman,” a song Porter wrote for his mother, he recalls life under her care and thinks of three miracles from the New Testament:

She never walked on water

She never turned that water to wine

But being round her made my blind eyes see

Unlike the rainy cover for What’s Going On, Porter’s face basks in the shine of the rising sun. It’s a fitting symbol for the sense of purpose and hope that undergirds the singer’s reflections: nothing less, and nothing more, than the light of faith.