Oldest Person in World Lived Through Times of Great Change, But Never Gave Up Her Bacon 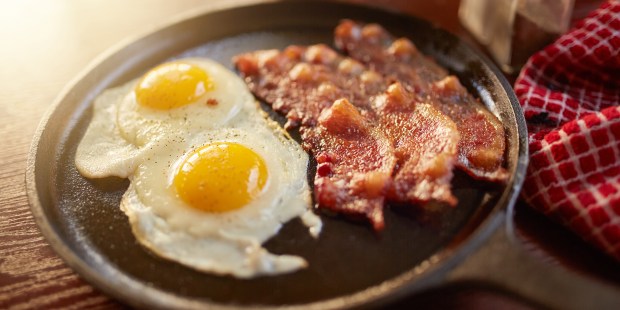 Bacon lovers take heart: the oldest known person in the world has just died, a couple months short of her 117th birthday, and she wasn’t at all concerned about how that delicacy might shorten her days.

Susannah Mushatt Jones, who was also the last living American born in the 19th Century, last year told Time magazine that she ate four strips of bacon with scrambled eggs every day.

Jones made up for it by never drinking or smoking, however, and made sure she got sufficient sleep.

Her ordinary life now seems extraordinary, considering the breadth of history she lived through. Born on an Alabama farm in July 1899, she was a grandchild of slaves and witnessed two world wars, the Civil Rights movement, and 20 US presidencies, including the first African American US president.

According to the BBC, Jones attended a special school for young black girls and graduated from high school in 1922. She moved to New York to work as a nanny, where she helped to start a scholarship fund for young African-American women.

The year of her birth … marked the kind of historical event most people only know from history books:

The start of the Second Boer War in South Africa

The beginning of the war between the US and the Philippines

The invention of aspirin

She was also born before the death of Queen Victoria in Britain, before Marconi sent the first ever wireless transmission, and before the Wright Brothers flew the first aircraft.

She remained active until the end of her life, serving as a member of the tenant patrol of her nursing home until she was 106. Catholic New York, newspaper of the Archdiocese of New York, visited the supercentenarian last summer at the Vandalia Senior Center in Brooklyn, where she kept her own apartment. She was receiving 24-hour assistance from a team of health-care professionals provided by ArchCare, the continuing care service of the Archdiocese of New York.

“She has had a wonderful life,” Dr. Lavilla Mushatt Watson, her eldest niece, told the newspaper.

If it weren’t for the woman she lovingly calls “Aunt Tee,” it is unlikely Lavilla would have gone to college. In fact Susannah pretty much ensured all her nieces were able to go to college and she did it while working more than 40 years as a domestic housekeeper and child care worker for well-to-do white families. Her starting salary for her first job in 1922 was $7 per week.

Jones wanted to be a teacher, and her family scrimped and saved enough to send her to a high school Booker T. Washington had founded. She was accepted to Tuskegee University, but alas, her parents just couldn’t afford the tuition.

“I knew that my parents didn’t have the money to even send me to high school, never mind college,” Susannah explained in a short biography written by her niece. “But I had faith and I prayed for God to help me find a way to fulfill my dreams so that I could help my family and educate children. I was filled with pride and joy to finally do something for my family.”

Shortly after she graduated Susannah boarded a segregated train and headed for Newark, N.J., on a ticket purchased for her by her prospective employer. She was expected to pay the fare back from her meager salary. Denied entrance to the dining car she brought along enough home cooked food to sustain her for the trip north. Eventually she would find her way to Harlem at the height of the Harlem Renaissance.

By all accounts, Susannah was a hard-working conscientious employee who had amazing skills dealing with children. She carried herself with dignity and demanded respect from her young charges. She had been briefly married to a man, Henry Jones, but didn’t have any children of her own. So the children she cared for became hers, in a way. Some families she worked for remained in contact and pictures of the children, now grown with their own families, adorn her small apartment.

But she never forgot her own family, her friends or her alma mater. During the Depression she learned that her old school was in financial difficulty. At a meeting in her Harlem apartment with school friends who had followed her north during the “great migration” they established the Calhoun Club to raise funds to save their school. Eventually the club became the Calhoun School National Alumni Association, and by the 1960s it had more than 200 members nationwide providing loans and scholarships to worthy students who might otherwise have been denied the opportunity to go to college. Susannah served as president and treasurer.

“She’s a wonderful, beautiful person. Sometimes she can get out of hand,” said another niece, Doris Leonard. “But she can do anything she wants because she’s 115 and we love her dearly.”

The oldest person in the world is now believed to be 116-year old Emma Morano, who lives in Verbena in Italy. She was born in November 1899, according to the Los Angeles-based Gerontology Research Group, said the BBC.