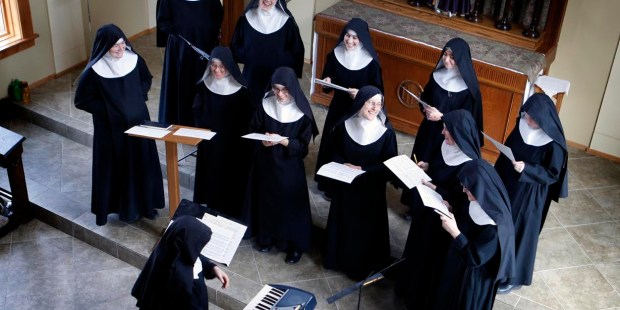 Following upon a string of hit recordings that have topped the classical music charts, the youthful Benedictines of Mary, Queen of Apostles have released their latest album of sacred music, Adoration at Ephesus. Given the nuns’ consistently high quality of performance, and their inspired musical selections, there is every reason to believe that this CD will continue their hit-streak.

Recorded by the nuns in small monastic chapel, these voices blend together magnificently, creating a unified tone of such purity that it is nearly impossible to guess the size of this community or the number of singers.  This is particularly true with the bell-like clarity of their ancient chants, sung in unison. In their more complex motets however, there remains a  superior depth of tone, intimate yet united, that must be the haunting by-product of these women singing together in worship for hours every day. Verbum Caro is a deeply prayerful highlight.

According to Mother Cecilia, Prioress of the House of Ephesus Monastery, the number of voices involved in the album varies. “There are only eight of us on Verbum Caro,” she told Aleteia, “but on a couple tracks it’s the entire community, which numbers 25 (minus our dear Sr. Wilhelmina – 92 years old!). For most of the tracks, there are about 18 of us singing.”

Adoration at Ephesus contains sacred music from a variety of composers, sourcing Aquinas, the Gospels and anonymous Jesuits. Catholics will recognize Latin classics like Tantum Ergo or Panis Angelicus, along with some newer pieces in English, but the true gems on this album are those arranged by the sisters themselves. “Soul of My Savior” stands out in particular, a new arrangement of Lorenzo Dobici’s beautiful hymn. The sisters have taken a triumphal piece and turned into something quietly humble and reflective. Opening like a hushed prayer, the number gradually swells in dynamic; it grows in emotion as the singers move more deeply into this metered contemplation of the Lord, and then brings the listener along into that prayer, arcing down, finally, into a decrescendo that moves like a gentle caress to the psyche and the soul.

The community’s use of dynamics is one of the most impressive aspects of this album. With this music meant as an aid to quiet prayerfulness – and this album might certainly be something to bring to Adoration and use (with headphones) while making a Holy Hour – the Benedictines have a contemplative’s instinct for where a text suggests driving intensity, and where it demands a whisper from the heart.

Outside of use for Adoration or in conjunction with prayer, this album’s quiet beauty will appeal to anyone interested in adding a mellow ambiance to their environment, whether at home or even while toiling away in our gray cubicles.

You can sample a few pieces here

J.P. Mauro is an editorial assistant at Aleteia, and a musician.