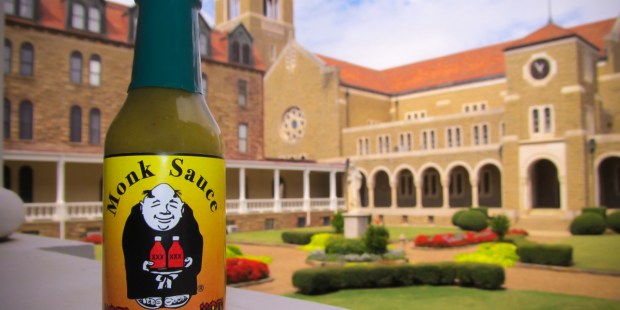 When Fr. Richard Walz, one of the monks of Subiaco Abbey in Arkansas, came back from Belize after being stationed there, he brought home some habanero pepper seeds and recipes from local Belizean cooks. The seeds were planted in the Abbey’s garden, next to a greenhouse in which the monks then started to grow some tropical crops, including papayas, ginger and lemongrass.

The result? A steady production of both fiery red and tangy green spicy “hot monk sauces,” as described by VICE .

This should not be surprising at all. After all, monks of St. Benedict’s order (be they Benedictines, Cistercians or Trappists) are responsible for creating, fostering and passing along a rich, diverse and exciting food tradition. Monks were the first to process chocolate in Spain. Trappists have been responsible for brewing the finest beers in Europe. Dom Pérignon of Champagne fame was a Benedictine himself, and some Trappist monasteries — like the Abbey of Gethsemane in Kentucky — are well known for their cheeses.  And now, these monks in Arkansas decided to diversify — they have been producing and selling nut brittle for years! — and started their own “monk sauce” line.

What makes these hot sauces special? The monks themselves claim its “the generous amount of peppers we use.” However, we think there has to be something else to it. After all, the best sauce is blessed sauce, right?