The Little Office of Our Lady: Through the Days at Mary’s Side 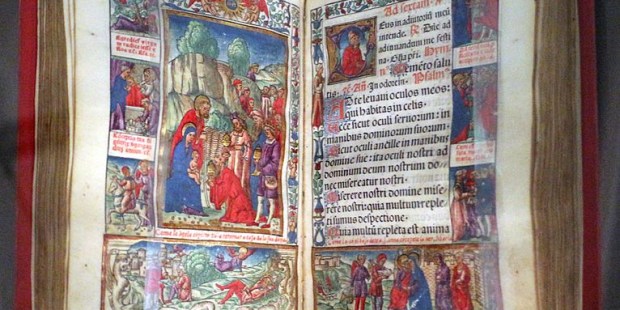 Do you pray some form of the Divine Office, the Liturgy of the Hours? This liturgical tradition is as old as the Church, built on the earliest Christian practice of praying the psalms and reading the Scriptures daily.

When I was a child, I would peer out the classroom window as the priests of our parish, their cassocks flapping in the Santa Ana winds, paced the schoolground with little black book in hand, their lips moving as they read the Office prescribed for all secular clergy. On rare visits from Father Peter, my dad’s cousin who was the Superior of the Columban Fathers, my sister and I would be cautioned to give him quiet time “to read his breviary” before he got back to astonishing us with coin tricks. In later life, I was privileged to join religious orders of women or men who chanted the canonical hours—Matins and Lauds, Prime, Tierce, Sext, None, Vespers and Compline—in community, as all religious were required to do. The beloved Gregorian chant albums of monks like the Benedictines of Norcia, newly popular with listeners of all faiths, are the monastic Divine Office shared with the world.

The Prayer of Christians
Over the centuries, the Divine Office, with its sequence of psalms, antiphons, versicles, lessons, and prayers, has often been revised. (The word breviary, describing the book but also the practice of reciting the Liturgy of the Hours, actual means “a briefer version,” condensed a bit from the longer and far more ornate office once celebrated in Rome.) The revision with which most of us are familiar came about in the 1970s, as the Divine Office was simplified and universalized to encourage its use not only by priests and religious, but by the whole Church in communion.

I remember receiving my first copy of The Prayer of Christians, an early English edition of the revised Divine Office, from my husband as a Christmas gift. I was pregnant with our son. To begin the days as we did then, praying Morning Prayer in the car on the way to work, gave a richness of meaning to the words from the Canticle of Zechariah—“You, my child, shall be called the prophet of the Most High, and shall go before the Lord to prepare his way”—and united us with the whole praying Church.

Today, I try to find time to pray the daily office, but am more likely to settle for one of the “briefer breviaries”—the streamlined Morning, Evening, and Night Prayers provided by publishers of monthly missals like Magnificat or Give Us This Day. You may do this, too, perhaps without knowing what a long and glorious tradition we are weaving into our hours.

Mary and the Hours of the Laity

What does this have to do with Mary, and her “Little Office”? It turns out that, from the Middle Ages on, it was the custom in many places to add a second, shorter set of prayers, readings, and psalms focused on the story of salvation as seen through Our Lady. The practice is said to have begun with the Benedictines of Monte Cassino in Italy, and soon spread to other communities, especially among women religious. When Pope Pius V standardized the prayers of the Church as part of the Council of Trent’s reforms, he mandated that a version of the Little Office of Our Lady be prayed by all clergy and religious on Saturdays, the day associated with Mary.

But the laity have always been called to sanctify the daily-ness of life by praying, too—and have found their way through Mary. The rosary, with its original 150 Hail Marys, was a means for lay people, who were often illiterate, to pray the Psalter—the cycle of 150 biblical psalms that formed the basis for the earliest Divine Office. The Angelus prayers, said in the fields and on the streets to the sound of the same church bells that called religious communities to Sext, None, and Vespers, fostered that same blessing of the day and its work. And during the Middle Ages, those of the laity who could read—royalty, the wealthy—commissioned Books of Hours for their own prayerful use, many centering on the Little Office of the Blessed Virgin. Richly illustrated with miniatures, decorated capitals, and gold leaf, these “illuminated” manuscripts contributed powerfully to the devotion to Our Lady that marked the age.

The Little Office also played an important role for Catholics in time of tribulation and persecution. When Catholicism was outlawed and punished in England, the Little Office—particularly in a form prayed for centuries by the Brigettine nuns of Syon Abbey—became a unifying and sustaining practice.