How Far Have We Come? Remembering the Catholic 1980s 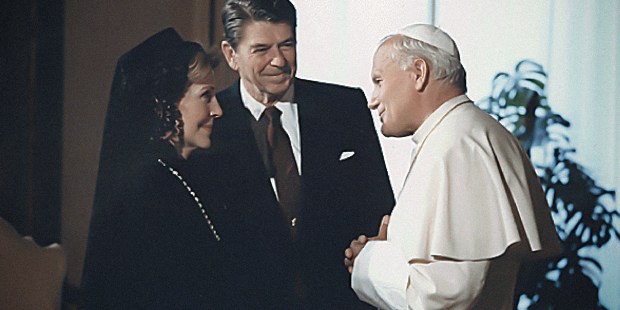 Think back to then when you worry about now

It is commencement season at Benedictine College, and that means I’m seeing the parents roll into town to watch their children graduate.

And that means we parents are sitting around talking about our own college days, which for most of us were in the 1980s.

If you were young and Catholic in the 1980s, Pope John Paul II was the first pope you were aware of. He was the miracle pope. He walked through the twin disasters of Nazi- and then communist-occupied Poland, and emerged unscathed. There had been that strange 1978 summer of three popes – Paul VI, John Paul I and John Paul II – and he came out of that unscathed too. Then he got shot in 1981, and came back again.

He was the charming, unstoppable miracle pope. Our faith was like that too.

The culture wasn’t toxic for Catholics yet. But maybe it was starting to be. The Cardinal Sins by our very own Fr. Andrew Greeley in 1981 sat on many of our parents’ bookshelves. The lady’s back (and backside) surrounded by cardinal red seemed the first opening of the floodgates to a genre that would include Christopher Reeve in 1982’s Monsignor and the 1983’s Thorn Birds miniseries: Priests as forbidden lovers.

Billy Joel’s 1977 Catholic-baiting anthem Only the Good Die Young was the biggest pop music attack Catholic homes had to contend with before Madonna came at them full-throttle with rosaries as apparel and songs that went from Like a Virgin in 1984 to the R-rated video of Like a Prayer in 1989. In between came her song “Papa Don’t Preach,” which raised the question “Is Madonna pro-life?” (Which she answered in the negative.)

Speaking of pro-life: If you were young and pro-life and Catholic in the 1980s, you were probably a Reagan Democrat, or a newly minted Republican. You knew Ronald Reagan’s dad was a sweet-natured Irish Catholic guy and you tried to claim him even though his mom raised Ronny in her religion.

Abortion is the issue of our time, and the 1980s were the years it roared to the forefront. Operation Rescue got started in 1986, and many of us would get arrested for our beliefs in the 1980s with it. The pro-life names in the 1980s were legend: Bishop Austin Vaughan, who did time for the cause; Joan Andrews (Bell), imprisoned long-term for her beliefs; Joe Scheidler and his megaphone, and Father Paul Marx, the “flying monk,” who founded Human Life International.

But most of all, we loved Cardinal John O’Connor, who said, “It is my very sincere prayer that if I live for a week, if I live for 20 years, my last breath will be in support of the sacredness of every human life.”

He was the face of American Catholicism: Charming but tough, unquestionably American and unambiguously Catholic. It was in his Cathedral that ACT-UP overreached in its attempts to push their agenda, and the whole homosexual rights movement changed to a much different, much more effective strategy.

On the P.R. front, Catholicism shone in the 1980s. In addition to JP2, we had Mother Teresa. She won the Nobel Peace Prize in 1979 and received the Presidential Medal of Freedom in 1985. When Pope John Paul II visited San Francisco in 1987, ACT-UP demonstrators picketed, but the picture of John Paul II embracing an AIDS patient made headlines, along with Mother Teresa’s Gift of Love AIDS hospice.

If you believed in the 1980s, you believed before the apologetics movement made it obvious that you should believe. Apologetics grand-daddy Karl Keating was still a lawyer, and wouldn’t publish Catholicism and Fundamentalism until 1988. Scott Hahn entered the Church in 1986 and wouldn’t release that cassette tape everyone suddenly had, “Protestant Minister Converts to Catholicism,” for years.

Why do I bring this up? Because things can look bleak in the world. We can forget the strength of the Church’s recent past and its very promising future. At several Catholic colleges, a generation of Catholics have had remarkable preparation and have been rooted deeply in the faith.

God has greatly blessed the Church — and he doesn’t show signs of stopping.

[Editor’s Note: Take the poll – Is the World Too Bleak?]

Tom Hoopes is writer in residence at Benedictine College in Atchison, Kansas. His book What Pope Francis Really Said is available for preorder.