What Happened on Our Wedding Night in the Honeymoon Suite 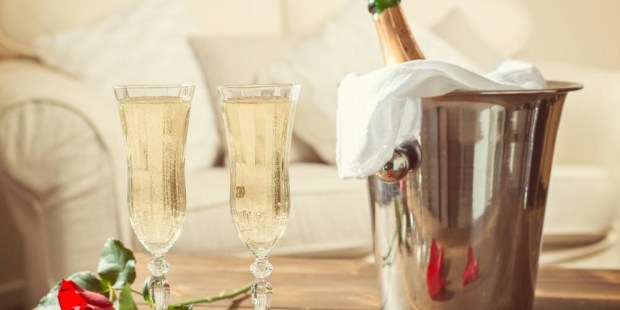 Read an excerpt from “Operating on Faith” by Matt Weber

Excerpt from Operating on Faith by Matt Weber ©2016 Matt Weber.   Reprinted with permission from Loyola Press.

The wedding night, the honeymoon suite—no, I’m not talking about those details! In fact, my wife would absolutely kill me if I even went into any specifics about our kiss during the ceremony. “Matty, I’m glad it’s over,” she said as we made it to the hotel that night. “And I’m also glad it’s just beginning.”

The front lobby of the chic Hotel ZaZa was packed with people. We were a bit surprised that there were two other grooms and two other brides there, reminding us that while we were the most special people of the evening in our minds, our distinction was shared—and that certain things in life do turn back into a pumpkin at the end of the night. As was the case for me on most evenings with an odd eating schedule, I felt queasy and thought a late-night sandwich would help. We called room service and plopped down on our plush pillow-top bed. While waiting for our food, we strangely ended up watching The Lawrence Welk Show on PBS, and for much longer than we might have thought would be the case on our wedding night. There was something strangely comforting about this variety show—its format, the singers, and the fact that we weren’t responsible for their travel logistics.

Our room service eventually arrived, and we picked at our food like snobby birds pecking around generic birdseed. We then turned in to bed, but my stomach was still churning and feeling off. This wasn’t the first time I had gone to bed with a sour stomach; antacids, various other remedies, and sleep usually helped to calm the subtle but persistent pain in my lower belly. On this night, of all nights, I was hoping for some gastrointestinal peace, but I would not be so lucky.

It seemed that the martini-glassed mashed potatoes, cheese tortellini, roasted chicken, and two Shirley Temples wanted to make a reverse journey just as my new wife and I were falling asleep. In the nick of time, I was able to navigate past the rental tux, the sleepy bride, and her pristine white dress to find the hotel ice bucket, which would become my new friend for the next two minutes. I was hoping my wife would think this was a bad dream and not have it be the memory of her first night with her new husband—a tired, gangly husband in boxer shorts, with his head in a bucket, waking her up with unpleasant sights, sounds, and smells. In fact, it was the smell I was most worried about, so I put the bucket on the room service tray and placed it outside the door.

“Matt, you really might want to warn the hotel staff about what you just introduced to a public hallway,” Nell said in a half-asleep yet fully rational state. Already the sage wisdom and counsel of my wife was in full effect, making me a better person and improving the world.

“Right,” I said, and then picked up the phone and dialed O. That night I fell asleep next to my new wife in a honeymoon suite that smelled of rotten tortellini. Yet fragrance-free love permeated the air that evening, as I was officially, formally, and in the eyes of God and man, tethered to my best friend. Someone who cared about the employee in the hallway finding surprise “ice.” Someone who found 45 minutes of The Lawrence Welk Show the perfect entertainment for a new couple after eighteen hours of being “on.” Someone who, while already fast asleep, instinctually hugged me back after I cozied up next to her in bed, finally, ready to sleep.

It was not the typical wedding night “excitement” that I had anticipated; rather, it was an unceremonious nightcap at the end of an already-packed day that showcased the first of many signposts of love that one finds as a newlywed.

Read an interview with Matt Weber, about Operating on Faith and what his ghastly experience has taught him, here.