Should We Really Spend So Much on First Communion? 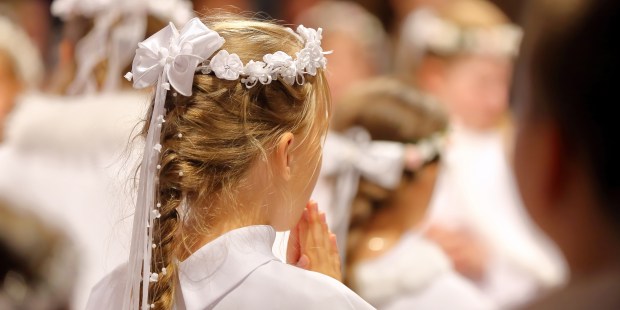 When children and families are more excited about the clothes and the party than about receiving Jesus, it should give us pause

It is the season of First Communions, as thousands and thousands of children from all over the world approach the altar to receive Jesus for the first time, present in Body, Blood, Soul and Divinity.

These boys and girls, with their simple, tender souls, prepare themselves to receive God himself in this permanent miracle that is the transubstantiation of the bread and wine into the Body and Blood of Christ — Jesus, the son of Mary, who in union with the Father and the Holy Spirit is hidden in the Eucharist.

Children, when they have been adequately taught, understand quite well the Real Presence of Christ in the Eucharist, because their souls are open to the Creator, and because the Virgin Mary, mother of Christ and of the Church, cares for these souls with special attention, with tenderness.

Nevertheless, in some places, or rather in some families, the spiritual reality is overshadowed by the occasion for a party that destroys the necessary simplicity and recollection of the boy or girl who receives the Body of Jesus for the first time.

Children perceive the spiritual reality much better when it is not overwhelmed by material experience in all that surrounds the act of the First Communion.

Some days ago, a friend mentioned to me that he had been surprised when a relative described the preparations for his daughter Isabelle’s First Communion.

According to my friend, Isabelle’s parents had invited some 70 people, friends and family. After the Mass they were going to celebrate with a meal at a well-known restaurant, and with appetizers, various courses, dessert, cake and gifts, it was going to cost an incredible quantity per person. So, a large sum just for the meal! Then drinks and a dance — like a wedding banquet!

But that wasn’t all. They wanted to dress the girl in an elaborate white tulle gown and veil, almost as if she were a bride. A special trip to the salon — something to accent her long hair — designer white shoes and various accessories. She was basically to be dressed as a child bride from a magazine.

My friend was concerned and decided to speak with his relative.

For her part, Isabelle, according to my friend, was more concerned about the party, the presents, the hairstyle, the dress, the make-up, etc, than about what was really important: receiving Jesus for the first time in the sacrament of the Eucharist. This was only natural when these aspects of the celebration took on so much emphasis.

The girl’s father was surprised to hear the comments of my friend, as Isabelle was their only daughter and it didn’t bother him to go all out. Besides, he said, the reservations are made, payments have been given, and there’s no changing the plans now.

My friend was disappointed by this, and hoped to have an opportunity to speak more with the family and with Isabelle herself about the real significance of the day.

The situation made me think that there are still parents who confuse a First Communion with a grand bash, thereby blurring the necessary simplicity that should characterize the event.

I asked myself, is it really worth it to spend so much money on a First Communion? Have we got our priorities straight?

There are those who want to turn a child’s First Communion into a sign of social prestige. All of this results in a weakening of the deep religious sense of the celebration.