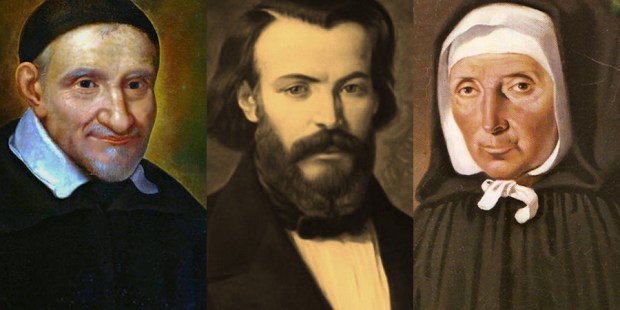 St. Vincent de Paul, St. Jeanne Jugan and Blessed Frederick Ozanam took on their work with no expectations of greatness

Saint-Servan, France, 1839: On a bitterly cold winter night, Jeanne Jugan, 47, looked out from her bedroom window and saw a person huddled outside. She went out and somehow managed to carry the shivering woman into her own home and place her in her own bed.

The woman’s name was Anne Chauvin and she was blind, paralyzed and quite old. She was also close to freezing to death. And so it began, for on that very night Jeanne Jugan turned her life to serving God by caring for the elderly poor.

Word spread quickly throughout the small town, and before long more elderly sick and poor were being brought to Jeanne. Other women, younger and healthier, were coming to her also, but they were coming to join her in her work. The small group of women grew and became known as The Little Sisters of the Poor.

By 1879, there were more than 2,400 Little Sisters of the Poor in nine countries. That year, Pope Leo XIII approved the constitutions of the order. Ironically, it was also the same year Jeanne Jugan died at the age of 86. She was canonized a saint on October 11, 2009, by Pope Benedict XVI.

Saint Jeanne Jugan never knew that when she was founding the Little Sisters of the Poor a young countryman of hers in Paris was responding to God’s flowing graces. Frederick Ozanam was a 20-year-old student at the University of Paris. Challenged by his “enlightened” college peers, he embraced their taunts “to practice what you preach.”

Accepting the challenge, Frederick went out and gave his coat to a beggar. Shortly thereafter, he and his four pals founded the St. Vincent de Paul Society. That was in May of 1833. They named the society after St.Vincent because he was known for his work with the poor.

Vincent de Paul never knew that 170 years after his death, an organization named after him would take up the mantle of helping the poor all over the world.

Frederick Ozanam died at the age of 40 and was beatified (declared Blessed) by Pope John Paul II in 1997.

For his part, Frederick never knew that the organization he had founded would one day work side-by-side with the Little Sisters of the Poor in their mission of charity toward the elderly poor.

St. Jeanne Jugan could never have known that from the moment she carried Anne Chauvin into her home she would change the world for thousands upon thousands of the sick and disabled elderly. She could never have imagined that in the 21st century her order would be serving the poorest of the elderly in cities all over the United States and in 31 countries around the world.

Blessed Frederick would never have imagined that his Society of St. Vincent de Paul would become a worldwide organization with close to a million members helping the needy all over the world.

The grand irony is that over the course of several centuries the paths of these three saints have been interwoven dramatically as their followers help the poor, homeless and downtrodden, no matter where they may be.

The three saints mentioned here probably never wondered where their simple acts of kindness would lead; they simply responded to God’s grace. Jeanne took care of that sickly woman and Fred gave away his coat. Vincent worked with poor tenant farmers and founded the Daughters of Charity.

These three unpretentious, God-loving people had two things in common. First, they embraced God’s grace and followed His call. Second, they asked for nothing for themselves and welcomed whatever came their way, including poverty. Their legacies live on in the thousands upon thousands of their followers and in all those millions who have been helped by their simple acts of faith. This is a beautiful thing.

As a Catholic I love these people and I am proud to consider myself part of their extended family. They set examples for us that we are supposed to emulate. They are our Catholic heroes and members of our Catholic Hall of Fame. They asked for nothing and gave everything. I love being able to talk to them. What I love best is when they talk back. And they do, sooner or later and one way or another.

St. Vincent de Paul, St. Jeanne Jugan and Blessed Frederick Ozanam, please keep praying for all of us. And — thank you!

Larry Peterson is a Christian author, writer and blogger who has written hundreds of columns on various topics. His books include the novel The Priest and the Peaches and the children’s book Slippery Willie’s Stupid, Ugly Shoes. His latest book, The Demons of Abadon, was published in April 2016. He has three kids and six grandchildren, and they all live within three miles of each other in Florida.