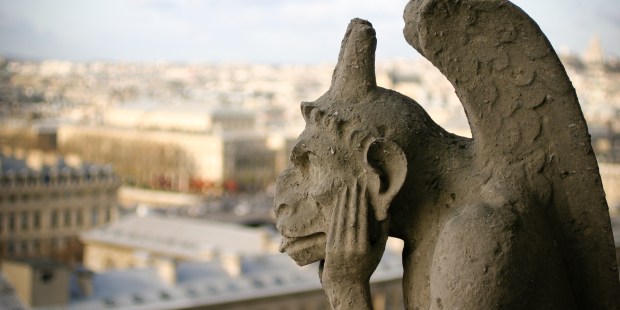 Brian Jeffery Beggerly CC
In fact, the French word gargouille is a derivative of the verb gargouiller, which in turn derives from the Greek gargarizó: to gargle. That is precisely what, as an architectural element, the gargoyle is in charge of: a gargoyle collects and then expels water away from the roofs and walls of the building.
Share
Print
Russell E. Saltzman - published on 05/19/16

Grace is not on order; like grits, it just comes with

Have you noticed how Christian writers often use numerical bullets for their articles? Here are four I found, no trouble. (You might browse the titles to find the sources, but trust me, they are out there.)

3 Misconceptions About the Church
5 Steps to Take When You Feel Distant from God
5 Things to Do When God Seems Distant
3 Reasons You Shouldn’t Give Up on the Church. The same title appears in many places where there are 5, 6, 9, and even 12 reasons listed for not giving up on church. I gave up on reading them all.

I tend to avoid checklist articles. It’s just a thing with me. But web writer Tyler Speegle has a list, as well, and I have been asked to look it at.

Speegle is a very prolific blogger who, let it be said, does not always start things with a numerical opening. In fact, I recommend his “Vote for a President, Not a Savior,” found at his blog site. There is not one number in it and he has a grasp on what Christian voters should not expect in a president.

He writes several Christian web columns broadly targeted for the “emergent church.” That, insofar as I can figure it out, is a Christian segment I would describe as Millennial Evangelical kinda Pentecostal. His work indicates he’s with it, he gets it, he knows what you want, and he delivers it. He produces brief snappy bits of hip spirituality.

In any case, Mr. Speegle’s 5 Reasons I Hate Religious Christianity bothers me, for the list, sure, but more for the content.

In the first place (oops, you caught me doing that numbering thing), he is confusing “religious” with “religiosity.” “…[W]hen I say religious,” says Speegle,” what I am talking about is a belief that says your performance, your devotion, your practices or your morals makes you right with God.”

No, that is a religiosity. It is marked in an unflattering definition as an exaggerated, affected zeal that at heart is only superficially religious. His title should have been “Why I Hate Christian Religiosity for No Listed Reasons.”

In any case, “losing your religion” is the first step (remember there are five) to discovering “that God wants us to live in relationship, not religion.” Otherwise our “religious Christianity” (he really means religiosity) tempts us to believe we will achieve our own righteousness.

It will also, as the numbers get ticked off in order, leave us feeling guilty; make us judgmental of others who do not match our own sense of religiosity; generate notions that God owes us something because we’re so religious; create false pride in our religiosity; and focus our attention on the technique of religion (how often to pray, what worship wars to fight, how much to contribute, etc.).

The upshot according to Speegle is that contrary to a “religious Christianity,” a religionless Christianity is an invitation to “an abundant life defined by relationship instead of dry, mechanical religion.” We must surrender self-constructed notions of achieving our own righteousness. Instead, we must receive it as gift, as grace, in a relationship with Christ.

Yes, we do receive the righteousness of Christ as God’s gift, as grace showered over us. We must receive it that way exactly because, after all, that is the only way it comes. Like trying to order grits with a Southern breakfast — as a Waffle House waitress explained it to me — “Hon, you don’t order grits; they just come.”

Yet, strangest thing, the more we know that gift, the more avid our gratitude and the deeper is our thankful plunge into a religion that, as some might describe on the surface, is dry and mechanical.

Same liturgy Sunday after Sunday; same sacraments celebrated time and again; Scriptures endlessly examined; saying prayers that are often memorized; but all of it drawing us to Christ and saying, here’s your Gospel fix, grace as a free gift of Christ; now, go do it.

It’s really a pretty short list as you think about it.

Russell E. Saltzman is a web columnist at First Things magazine and lives in Kansas City, Missouri. His latest book is Speaking of the Dead. He can be found on Twitter as @RESaltzman.