A Journey Using a Medieval “Map of Hell” 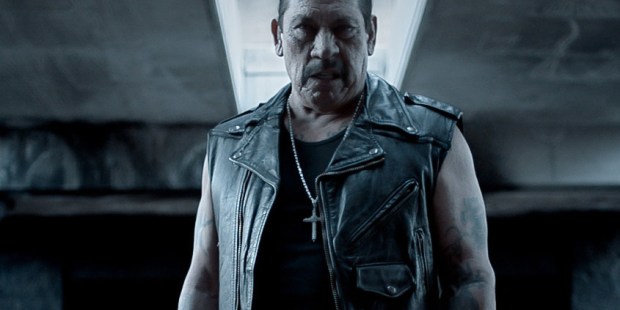 In this 2-hour special. Danny Trejo drags us through the depths of hell as depicted over thousands of years

The “religious sense” has hit Nat Geo overnight – and the Catholic Church has found itself on center stage.

First came a dramatized documentary about Pope Francis and a new series from Morgan Freeman about the “the story of God” (which affirmed the co-existence of faith and science in Catholicism and displayed a kind of “spiritual bond” with Rome).

Now, Catholicism is at the center of a very different sort of travelogue, a two-hour special called “Map of Hell.” Donning a silver cross, action anti-hero Danny Trejo (Machete) kicks this special off with some “bad news”: “Someday, we’re all gonna die.” But then what?

“What if I died today?” Trejo growls, standing over his own dead body. “Could I be going to hell?” The actor then becomes a kind of cross-cultural, heavy metal Virgil, dragging us through the depths of hell as it’s been described over thousands of years.

First up is the shadowy Greek underworld of Hades and its evolution in Socrates, Plato, and Virgil. The takeaway here seems to be that, whatever else hell is, it’s in the highest contemplation of art and philosophy that the map begins to take shape.

That trajectory continues into the early Christian and medieval periods. There’s a 12th–century Irish text about one man’s vision of the afterlife; a 14th–century chapel painting with a “menu of horrors” so graphic that some of the content is blurred out for television; and Michelangelo’s 16th-century masterpiece The Last Judgment, in which Trejo identifies with the anguished face of the “damned man.” “We see one soul right after judgment,” he says, “the face of the damned, looking out at us, as if to say: ‘I am you and you are me.’ And that’s the thing. Sure, I’ve made a few mistakes in my life. But it’s not only guys like me that go to hell. It can be anyone. Sin is everywhere.”

The show’s art direction is excellent, but it’s with Dante’s Divine Comedy that things really heat up. “For Dante, surrendering to sin means choosing the self over the route to God,” Trejo says as an unsettling montage of stacked cash, bared flesh, and brutish violence unfolds. “Take it from me, it can happen to the best of us.” One by one, we meet Dante’s sinners, doomed to live out “the nature of their sin” in the nine circles of hell, which descend from “crimes of passion” to “crimes of malice.” At the bottom of the inferno are those who have strayed furthest from God, lodged forever in a lake of ice.

What seems to interest Trejo most, though, is Dante’s “escape route” of purgatory, where sinners scale a menacing rock face in droves to reach heaven. Trejo even visits the skull-covered Fontanelle cemetery in Naples, where a woman prays to Mary to intercede for these suffering souls.

The last section begins with the Reformation and its sudden rupture with “Catholic ideas” like purgatory. What follows are two distinctively modern visions of hell. On the one hand, there’s a fire-and-brimstone pessimism chastising “sinners in the hands of an angry God.” On the other, there’s a psychologizing that reduces hell to the horror genre, a quirk of evolutionary survival.

But both of these visions fall flat after our journey through the Inferno. Dante’s depiction is not only more vivid – it’s also more human. For T. S. Eliot, the earthy Purgatorio was not just a religious text; it was also one of the best lenses through which to understand the journey of life itself.

And where theology is concerned, Trejo only scratches the surface.

What is hell? The Catechism defines it as an eternal “state of definitive self-exclusion from communion with God and the blessed,” and its chief punishment as “eternal separation from God.” Beyond that, there is a wide range of both literal and figurative views about fire, torture, etc., most of which fall comfortably within the ambit of the Church’s teaching.

And who ends up there? “In Catholicism,” Trejo says, “only really evil dudes like Hitler or Ted Bundy go straight to hell. The rest of us head for purgatory.” But this isn’t accurate. Many Catholic thinkers, e.g., Augustine and Aquinas, have argued that, in light of the great sin of Adam, the majority of humanity is doomed. Others, e.g., St. Teresa Benedicta of the Cross and Hans Urs von Balthasar, have argued that, in light of the great love of the new Adam, we can reasonably hope that “all souls” be saved (“especially those in most need” of that mercy, as one of the Fatima prayers puts it). This debate rages on to this day, but has never been settled dogmatically. The Church remains suspended somewhere between doom and hope – and rightly so.

To most viewers, the middle portion of “Map of Hell” is probably the most entertaining, but also probably feels a bit too medieval to take seriously. But with these points in mind, Trejo’s show can afford us another kind of “escape route” out of the two dead-end views of hell on the market today, and back toward a more poetic – and more humble – topography.