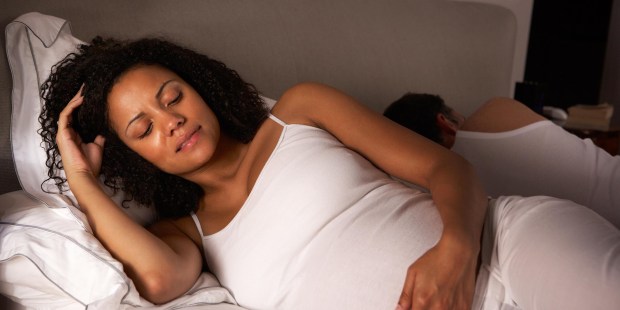 As her body joins forces with her developing baby, a mother learns to put her child’s needs before her own

If you ever wonder whether Tennyson was being quite fair when he described nature as “red in tooth and claw,” all you need to do is step into your backyard, where more than 9000 different organisms can pass through the space of a single cubic foot over the course of 24 hours, as photographer David Liittschwager discovered. All of these creatures and more are in competition for the same energy, resources, and space. Darwin, who saw this competition everywhere he looked, wrote in On The Origin of the Species that nature “acts solely by and for the good of each.” And you don’t have to be a scientist to see that in the natural world, everything looks out for itself. This seeming selfishness isn’t personal, it’s just how the world works. It’s what an organism is supposed to do.

So maybe you can see why a pregnant woman might feel like her body has suddenly turned treasonous. An organism is supposed to look after its own needs first—but there she is taking on all manner of unpleasant side-effects as the baby’s needs are met. One example: did you know that if the baby isn’t getting enough calcium, the body extracts it from the mother’s very bones while she faces osteoporosis?

Life may be conceived in a moment of sacred unity, but from the instant of its beginning, it exists on a battlefield. Where there was one body before, now there are two, existing in the same space. Since the nature of a creature is to tend to its own needs, it follows that there ought to be war. But notice what the mother’s body does—it leaves its camp, lays down its arms, and joins the cause of the child.

See what I mean? Treason.

Well, as Patrick Henry said, “If this be treason, make the most of it!” In humanity’s case that means making adjustments in both living and thinking. Servant of God Catherine Doherty, who founded the Madonna House Apostolate, coined a phrase that would come to be put on plaques and signs, displayed everywhere where people know of her work: “I Am Third.”

She explained “This means that God must come first in our lives, and our neighbor is second. We are in last place.”

Now, we know this is spiritually necessary. We know that love means choosing to be like the grain of wheat, to die, and so to bear much fruit. (John 12:24) But what a surprise to find this love played out in the physical world, a world that is supposed to be red in tooth and claw.

It is second nature for us to take lessons from the physical world and apply them allegorically or metaphorically to the spiritual life. Didn’t Christ teach like that constantly, when He spoke about the mustard seed, the pearl, the flowers of the field, the leaven? But this is no metaphorical lesson. Here, it’s less like Christ saying “The kingdom of heaven is like a pearl,” and more like Christ when he says “Follow me,” and then suffers injustice, debasement, abandonment, and torture, all for the sake of the “other.”

Eventually, a caring mother will deliberately choose to put her child’s needs ahead of her own, sacrificing her energy, her sleep, her routine, and many of her other pursuits. But long before she’s entrusted with that choice, the body firmly gives the needs of the child higher priority, telling her firmly, “You are second.” Or, yes, third, if she is a woman of faith.

So the body of the mother biologically clues her in to what she must choose to do showing her how to do what she will have to later choose, just as Christ showed us what to choose: he left us clear instructions—Love one another, (John 13:34)—and then he told us exactly what he meant: “Greater love has no one than this: to lay down one’s life for one’s friends (John 15:13).” The pregnant mother’s body does not die, but it has nevertheless laid aside its life, by giving up the most fundamental natural right—the right to self-preservation—for the baby.

So, though the trees of the forest compete for the soil and sunlight, each one yet gives of itself to nourish its seed.

And though the men of the earth battle for that same soil and sunlight, the human body has love written in it so deeply that it absorbs war. Each life begins, physically, in an environment of Christlike self-abnegation, even before a mother embraces it.