Why Is the Eucharist Called “the Host”? 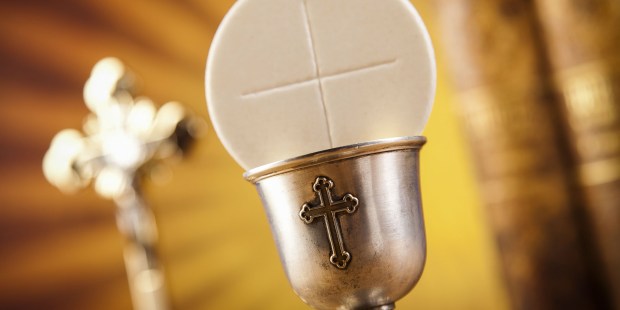 The Latin word “hostis,” meaning victim, was first applied to the Eucharist in early Christianity

The Eucharist is referred to as a host, but why?

I decided to seek out the origin of the word “host,” so I checked several dictionaries and discovered that a Latin word linked to its history meant “victim.”

The Romans referred to a vanquished enemy offered to the gods as a hostis.

The term became common in Western Christianity because of its use in the Vulgate (the Latin translation of the Bible, made mostly by St. Jerome), for example in Ephesians 5:2 and Philippians 4:18, to signify sacrifice.

Thus “host” came to refer to the greatest victim of human aggression: God-made-man, crucified and risen.

Christians adopted the word “host” to refer to the immolated Lamb who was risen and present in the Eucharist. It came to signify the reality that Christ himself unveiled at the Last Supper: “This is my body … this is my blood, poured out for you.”

The consecrated bread is thus a “host,” the true host, the true victim, the Body of the Risen One, once mortally assaulted by human evil and now alive among us, surrendered to us as food and drink: Take and eat.

Unfortunately, much of the significance of the word “host” has been lost, and it has come to refer simply to the circular piece of unleavened bread, both before and after consecration.

“Host” for me is all of this: the death of Our Lord and his resurrection, the total gift of himself, his presence in the consecrated bread and wine.

As we are invited at each Mass to behold this host, we bow in profound reverence, on our knees, in contemplation, taking up the commitment to “offer [our] bodies as a living sacrifice, holy and pleasing to God” (Romans 12:1).

To adore this “host” is to surrender oneself to the mystery so as to live it day after day. And to enter into Communion with this “host” is to assimilate this mystery in the whole of our being so as to become like Christ: a victim, given in service to our brothers.

Now I understand better what the Second Vatican Council exhorts when it expresses the desire for faithful who participate at Mass with “a good understanding of the rites and prayers” so that they should “take part in the sacred action conscious of what they are doing, with devotion and full collaboration.”

That “by offering the Immaculate Victim, not only through the hands of the priest, but also with him, they should learn also to offer themselves; through Christ the Mediator; they should be drawn day by day into ever more perfect union with God and with each other, so that finally God may be all in all” (Sacrosanctum Concilium, 48).

[This reflection is modified from a meditation by Fray José Ariovaldo da Silva, OFM]

Editors’ note: Some readers have taken exception to, or been confused by, this author’s focus on the role of the Latin word hostis (“enemy”) in the etymology of the Eucharistic host. Indeed, most explorations only go back as far as the Latin hostia (“victim”), without making clear that victims in this sense were enemy captives sacrificed to the gods. (There is a separate Latin word,victima, that lacks this connection.) The roots and cognates of host are many – going back to the Indo-European word that means both “stranger” and “guest”—as you can see from the related words host, guest, hospitality, hostel, hospital, hostile, and hostage, as well as hosts, meaning “armies.” These levels of meaning give added richness to our understanding of the Eucharistic presence of Christ, who is Stranger, Guest, Victim, and Host, and we apologize for any confusion caused by focusing on one aspect out of many.