The Prophetic Witness of a Murdered Jesuit 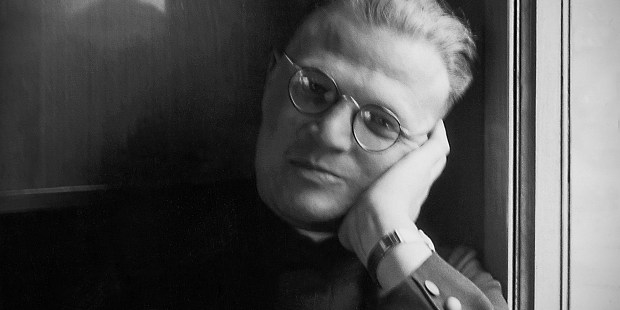 Father Alfred Delp, executed by the Nazis, can serve as a companion for those struggling in times of despair

Alfred Delp is a hero who deserves to be better known. He was arrested by the Nazis, tortured, and executed—at the age of 38. He can serve as a companion and guide for those who are struggling to keep faith in times and places of despair.

His heroic witness while in Hitler’s prisons should challenge us, humble us, and give us hope. Picture the scene: Alfred Delp in a tiny prison cell, surrounded by the screams of fellow prisoners and the stench of death. Above him are Allied planes raining down destruction. There is Father Delp, who professed his final Jesuit vows in prison, now with fettered hands writing Advent meditations on scraps of paper that would be smuggled out just before his execution.

Put yourself in that situation. Can you imagine yourself writing the following words?  “In the same way that lies have gone out from people’s hearts, penetrating throughout the world and destroying it, so should—and so will—the truth begin its healing service within our hearts. Light the candles wherever you can, you who have them. They are a symbol of what must happen in Advent, what Advent must be, if we want to live.”

The candle is an image of the Christian calling, and is also a symbol of the witness Father Delp gave in his suffering and death. In a sermon before his imprisonment, he said that the illumination of the candle “is giving light at the cost of one’s own substance, so that one is consumed in the process. Anyone who wants to comprehend Christ’s message of light … must comprehend this one thing: the mission, the duty to shine, to draw others, to see, to heal, to do good at the cost of one’s own substance …”

Think of it! “To give light, at the cost of one’s own substance.” All Christians are called to such witness—Father Delp lived that call fully. But how? How can we insist on the image of the candle and then live its consummation without hesitation or complaint as he did? It’s tempting to explain him away by saying something like this: “Well, you know, God just dumps a whole lot of grace on some people and then they can do some amazing things that ordinary people just can’t!”

The appeal of such a dismissive explanation is that it excuses us from living, and perhaps even dying, if necessary, like Father Delp. In other words, God favors some people with truly amazing grace, while the rest of us get, at most, merely ordinary grace. Consequently, we can only live ordinary discipleship and give only ordinary witness. On this line of reasoning, if we find ourselves incapable of giving great witness, then there is only God to blame, because he didn’t give us the amazing grace that amazing witness requires.

Such thoughts, I believe, would make Father Delp laugh—and cry. He would laugh because such thoughts are so foolish; he would cry because they ask so little of God and even less of ourselves. From prison he wrote, “Hopeless: that is the fetter history so often uses to bind salvation’s hands. It discourages the hearts of those who know and sense what is happening, bringing them to trembling and despair, to cheap silence and weary resignation.”

As we read those words, let’s ask, “If Father Delp were alive today, could I look him in the eye?” I don’t think I could. His indictment describes me too well. And his remedy for those who excuse themselves because they lack grace shakes and shames me: “God enters only His own rooms, where someone is always watching for Him.” If it appears that God has not favored us with amazing grace, perhaps it is because we have not favored him with a heart that would receive it. Delp teaches us that we cannot receive from God what we do not have the heart to desire: “His nearness is as great as our call to Him is earnest. His liberation is as near and effective as our faith in Him and in His coming is unshaken and unshakable. That’s the truth!”

Each age and place has its own gloom. The darkness we can now see and taste and feel can paralyze us—if we let it. Father Alfred Delp, a young Jesuit engulfed in brutal darkness, blazed brightly and thundered eloquently from a Nazi dungeon, because he spent his substance opening his heart to the nearness of God. Let’s ask for his intercession, that we might like him bring light and music to shine amidst the shadows and whispers of the fallen world we have both inherited and made.

When I write next, I will speak of the grace of happy reunions. Until then, let’s keep each other in prayer.