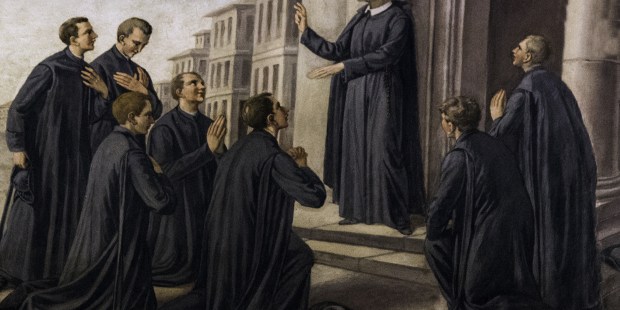 Bringing the Church “outside” both figuratively and literally, the Apostle of Rome and his Oratorians seem perfectly suited to today’s Franciscan task

For most Catholics, the narrative about Saint Philip Neri is a bit vague; he seems less well-known than the other vibrant reformer saints of the sixteenth century. “Philip Neri?” People will say, “Oh, yeah, he was the cheerful saint, loved to laugh,” and usually that’s all they know.

It’s true that Philip was cheerful. Saint Teresa of Avila — born, like Philip, in 1515 — would have loved him because he was certainly not one of those “sad-faced saints” she dreaded. Rather, Philip Neri was that rare creature, “a man in full,” with all the paradoxes contained therein. He was a scholar; he was a prankster. He was a serious confessor but not “tightly wound.” He once walked into a party held in his honor with half of his beard shaved off, because he didn’t want to be seen as too special. He didn’t fall into the trap of believing his own hype. Read his maxims and sayings, (or watch this splendid film about him) and you understand that Philip Neri was a serious Christian, a serious reformer, a serious (Avila-level) mystic.

If he was all that, and humorous besides, why doesn’t he loom larger in our Catholic culture, right up there with Teresa, and Charles Borromeo, Francis Xavier and his good friend Ignatius of Loyola?

Well, possibly because of his humor. Just as humorous films are rarely honored with awards because “serious” artists find them frivolous, it’s possible that Philip Neri’s fun reputation makes him a “lightweight” in the minds of some. Not, however, in the highly serious mind of Bl. John Henry Newman, the first English-speaking Oratorian, who wrote prayers and litanies to Philip, nor in the minds of the US Special Forces who take him for their patron, explaining, “Philip Neri embodied the traits of the ideal Special Forces Soldier, Selfless, Superb Teacher, and Inspirational Leader.”

All true. At a time when many churchmen were dissolute or finding privilege in their priesthood, he was ministering to the sick and to people living in the filthy streets of Rome. He was also doing something else: he was urging them to come into the parish churches, not just to participate at Mass, or receive the sacraments, but to attend discussions and debates and musical concerts and to watch plays, or be read to from fine writers. And then, in good weather (or sometimes in the drizzle) he would invite the people in church and the people in the streets to take long walks with him, during which there would be talking and joking and singing, and church-visits, and Holy Mass or devotions, and then a meal shared, al fresco, under the trees, with everyone contributing what they had, like the first church pot-luck picnic. The Seven Churches of Rome Pilgrimage? Yeah, that was Philip’s doing. So was the Forty Hours Devotion. He was a Catholic Innovator.

Like Pope Francis, Philip Neri was accessible, pastoral, human, humane, humble, self-possessed, compassionate, firm; dead serious when seriousness was required, but easygoing when it was not. He’d start the day with, “let’s do some good!”

But it is within the creation of his Oratory that he seems to have fully anticipated Francis by 500 years.

While long-admiring Philip I didn’t “get” the Oratory — or what Francis meant when he talked about the Church “going outside” — until I participated in a discussion panel at the Oratory Church of Saint Boniface, in Brooklyn. There I found a Novus Ordo Mass prayed reverently and beautifully and I finally saw what it is that Philip created in the Oratory.

After Mass, while people partook of a plentiful “pot luck” breakfast, the Presence was reverently (and discreetly) reposed elsewhere and the Oratory became that place of talk and gathering and mind-meeting that Philip intended, and what Francis calls us to, today: a parish church that steps outside and brings people in, meeting for the simple sake of community and Christ, making everyone feel like they really do have a place in the church and in the pew, and then leaving room for the Holy Spirit to work things to God’s purposes, an idea in which Philip endorsed completely, saying “All of God’s purposes are to the good; although we may not always understand this we can trust in it.”

Within the Oratory, everyone is welcome; discussion is open and respectful and ever with a mind toward better knowing Christ. It is evangelism that speaks its mind and allows another mind to speak back, and — as Rumer Godden would say — “mind on mind kindles warmth.” When you step outside, you want to bring that warmth, that sense of brotherhood and charity, out into the streets with you.

Perhaps that’s why in England they are talking about “the unstoppable rise of the Oratorians” in the midst of this cold, polarized world.

A cheerful saint? Yes. A leader strong enough to inspire the manly men of the Special Forces Association? Check. A saint the whole Church could stand to know better, especially during this pontificate? Oh, indeed.

And when Father Roger Landry longs to call Philip the official “Patron of the New Evangelization”, we concur. He is the patron of Aleteia’s English edition.

Saint Philip Neri, pray for us!

St. Philip Neri: How to Pursue Sainthood in 25 Pithy Lines