A Link to History, Cardinal Capovilla Dies at 100 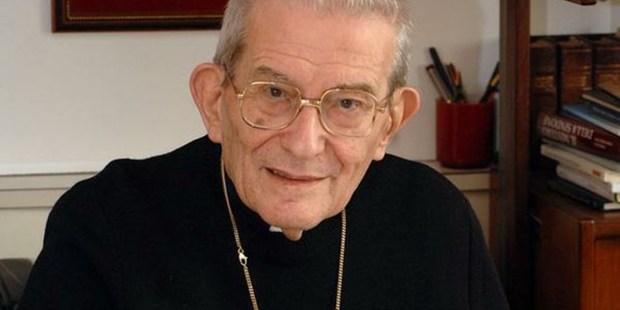 Italian prelate was secretary of the Pope who convened Vatican II

A 100-year-old cardinal, a key link to the history of the Second Vatican Council, died on Thursday. Cardinal Loris Francesco Capovilla, who was secretary to Pope St. John XXIII, the Pontiff who convened Vatican II, died in Bergamo, Italy, after being hospitalized at the Palazzolo clinic there, according to Vatican Insider.

Cardinal Capovilla died on the day that is celebrated in Italy as the feast of Corpus Christi—and three days after the 76th anniversary of his ordination to the priesthood.

Born in Pontelongo, near Padua, Capovilla was ordained on May 23, 1940. Among other duties, he served as editor of a diocesan weekly magazine in Venice. He met Archbishop Angelo Roncalli, the future Pope John XXIII, in Venice in 1950, when Roncalli was papal nuncio to France. In 1953, Capovilla saw him again at the nunciature in Paris. When Roncalli was appointed Patriarch of Venice, he asked Capovilla to work on his “team.”

Upon his election to the papacy in 1958, John XXIII told his secretary, “Between us, nothing changes; but here there are different requirements compared to Venice. We are at the center of Catholicism, many things will change our lives.” Fr. Capovilla continued to serve Pope John until his death in 1963.

In 1967 Blessed Pope Paul VI named Fr. Capovilla Archbishop of Chieti and Perpetual Administrator of the Diocese of Vasto (today Archdiocese of Chieti-Vasto). Paul VI himself ordained him a bishop in St. Peter’s Basilica. In 1971 Archbishop Capovilla was chosen as the Prelate of Loreto and Pontifical Delegate for the Loreto sanctuary.

Since 1988 the archbishop had lived in Sotto il Monte Giovanni XXIII, near Milan, Roncalli’s homeland, running a small museum dedicated to the late pope’s memory. His numerous writings included the memoir The Heart and Mind of John XXIII.

Capovilla was created cardinal by Pope Francis on Feb. 22, 2014, at the age of 98. He told Catholic News Service that his elevation was a “sign of attention to all those thousands of priests around the world who have spent their lives in silence, in poverty, in obedience, happy to serve God and our humble people, who need, as Pope Francis continually says, tenderness, friendship, respect and love.”

When he turned 100 last Oct. 14, Cardinal Capovilla chose to celebrate together with refugees hosted in Sotto il Monte.